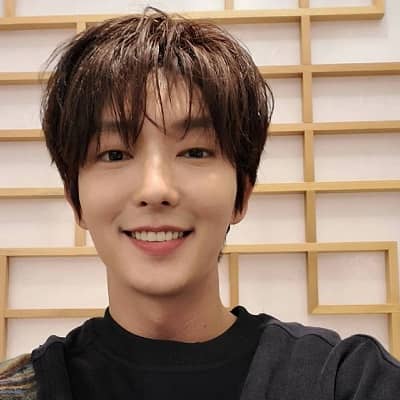 I don't want to be a star who shines and then disappears. I want to be a true actor who marks his place among the crowd.

I have a clear understanding that being an actor is a job that faces the public. I think the responsibility and duty that such a person needs to have is of primary importance for an actor.

Lee Joon gi currently appears to be Single. He hasn’t introduced anyone as his girlfriend or lover as of now.

Previously, he has been in a relationship with fellow actress Jeon Hye Bin. The pair met on the set of the 2014 drama Gunman in Joseon. The couple started dating in early 2016 but their relationship didn’t go far and get separated in the year 2017.

Who is Lee Joon gi?

Lee Joon gi is a South Korean renowned actor, singer, dancer, and model. He rose to fame after appearing in the lead role of a clown in the critically acclaimed film The King and the Clown.

Similarly, he gained further recognition after portraying the role of Seo Jung-woo in the SBS k-drama My Girl. He has been currently signed to a Seoul-based talent management agency “Namoo Actors Co.Ltd”.

Lee was born in Busan, South Korea on the 17th of April 1982. However, he spent most of his schooling years in nearby Changwon. He holds South Korean citizenship and belongs to the Asian ethnicity.

Lee hasn’t yet introduced his parents in the media to date. He has a younger sister whose name is unknown. He inclined his career towards the acting field after he saw a performance of the play ‘Hamlet’ in his school play.

After finishing high school, he went against his parent’s wishes as his parents wanted him to enter university but he moved to Seoul to pursue a career in the entertainment industry. Afterward, he enrolled at Seoul Arts Univerity on a scholarship and graduated in 2007 majoring in Acting.

In 2001, Lee made his debut as a print and commercial model. Before that, in the early phase, he worked at various part-time jobs such as waiting tables while struggling to become a model. In 2003, he made his acting debut in a minor role in the MBC drama, Nonstop 4. Afterward, he appeared in some slightly bigger roles in dramas such as DRama City: What Should I Do? and Star’s Echo.

Similarly, Lee made his big-screen debut through the Japanese production film, The Hotel Venus in the year 2004. That year, he also appeared in the film Flaying Boys where he portrayed the role of Dong-wan. Lee got his career big break after he played the second lead role of “Gong-gil” in the film, The King and the Clown in 2005.

In the same year, he starred in the SBS romantic drama, My Girl where he was cast in the role of Seo Jung-woo. Lee has appeared in the tvN reality show, World Special “LOVE” – Indonesia with Lee Joon-gi and Kim Ha-neul in 2009. Also, he starred in web series like 7 First Kisses (2016) and Secret Queen Makers (2018). Lately, he was cast in the 2020 Korean television series, Flower of Evil in the main role as Baek Hee Sung/Do Hyun Soo.

Lee has won 35 different international awards during his acting career. Also, he nominated and won numerous awards to date. Some of them are,

In September 2008, Lee has a contractual dispute with his agency Mentor Entertainment and the agency had filed a suit to demand the actor pay over $4 million in compensation for breaking a contract between the two parties.

On June 10, 2015, Lee was injured while shooting the drama, ‘The Scholar Walking in the Night’, and got fractured the right side of his nose. Soon after the accident he was ushered to the emergency room and underwent surgery later that day.

In May 2018, Lee was blacklisted by former South Korean President Lee Myung Bak alongside Kim Hu Ra, Kim Je Dong, and more. It is reported that the blacklist was created to persecute a list of celebrities who were against the president’s opinions.

In the case of actor Lee, it is speculated that Lee Myung Bak was unhappy with the actor’s opposition against his support of importing U.S. beef in 2008. Similarly, Fans suspect that he was banned because of his role as a rebel in the massacre of Gwangju in the movie called “May 18”.

Lee’s primary source of income is his profession, actor. Besides, he earns through modeling, brand endorsement, sponsorship, and a singing career. As per other online sources, he has an estimated net worth of around $5 million as of 2021. Similarly, he was paid around $45,500 per episode in his dramas.

The actor has a charming personality with an impressive height. He stands at the height of 5 feet 10 inches tall and weighs around 67 kg. He has a fair complexion. Likely, he has black hair with a dark brown pair of eyes.

The actor is active on Instagram under the username @actor-jg where he has over 5.6m followers. Likely, he has more than 206.1k followers on his Twitter account.

Similarly, he has a Facebook page with nearly 3.2m followers. He has already a verified Instagram, Twitter, and Facebook accounts. Furthermore, he has a self-titled YouTube channel where he hasn’t uploaded videos. Despite no videos, he has over 74.7k subscribers on his channel.