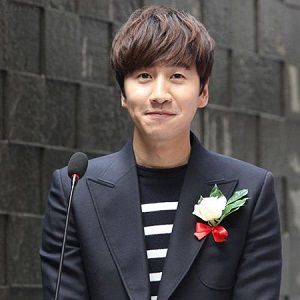 Lee Kwang-Soo has been dating actress Lee Sun-bin since July 2018. They are living a happy life with no extramarital affairs.

Who is Lee Kwang-Soo?

Lee is a South Korean model, actor, and entertainer. Besides acting, he is also known for being one of the regular cast members of the South Korean variety show Running Man since 2010.

Lee Kwang-Soo was born in Namyangju, Gyeonggi Province, South Korea on July 14, 1985, age (33). His father’s name is Lee Jong-Ho (father) and his mother’s name is unknown.

As a kid, he was obsessed with art, especially drawing cartoons and animated characters that he saw on TV. This early hobby sparked a deep interest in him about art, and his parents encouraged this, but when he grew up a bit and talked to them about the possibility of a career in the field, they weren’t too happy.

As a result, he just limited drawing to a hobby for the rest of his life. Eventually now also, he does painting, draws sketches and graffiti to keep his passion alive. There is no information about his siblings. Lee holds South Korean citizenship and his ethnicity is Asian. His birth sign is Cancer.

He attended Dong-ah Institute of Media and Arts to hone his skills in acting and other areas of filmmaking and after he graduated, he decided to do his mandatory military training.

He started modeling once out of the military service in 2007 and got some lucrative modeling offers in the very early stages of his career. Likewise, at the same time, he kept auditioning for roles in TV and films and made his debut with the 2008 sitcom ‘Here he Comes’. Besides that, his performance was noticed and quickly after that, he appeared in ‘High Kick Through the Roof!’, another comedy series.

He appeared in a few less significant roles, but his fate changed with a stint in the form of ‘Running Man’, a variety show. He also joined the cast of the show in 2010 and his character became one of the most loved characters in the entire show very quickly and owing to the show, his popularity skyrocketed and earned him the title ‘The Prince of Asia’.

Additionally, he also dominated 2012 with his impeccable comic timing with the comedy shows ‘Wonderful Radio’ and ‘All About My Life’. Later, he played a key role in drama ‘It’s Ok, that’s Love’.

During 2015, he has appeared in the film ‘Collective Invention’ and earned widespread acclaim. Likely, he first appeared in a cameo role in ‘Descendants of the Sun’ and ‘Dear My Friends’ and then starred in ‘Entourage’.

Likewise, his appearance in the series ‘The Sound of your Heart’ turned Lee into a big star in China and South Korea. During 2017, he also made a guest appearance in the show ‘The Best Hit’ and is all set to play a pivotal role in a comedy film ‘The Accidental Detective 2’, which happens to be the second installment in the hit franchise. Whereas, his several guest appearances on the variety shows include ‘Strong Heart’, ‘Happy Together 3’, ‘Healing Camp’ and the Chinese rendition of ‘The Amazing Race’.

On talking about earnings, this popular actor’ss salary for per foreign commercial is around one billion won (approx $881k) but his net worth is not disclosed yet.

There were rumors that he dated “Running Man” co-star Lee Kwang Soo. Likely, the two share matching couple bracelets in a separate interview with Xportsnews that same day.

Lee’s height is 193cm, hair color is brown and his eye color is black. Unfortunately, his other body measurements are unknown.

Also, read the affair, salary, the net worth, controversy, and the bio of Ha Jung-woo, Kim Soo Hyun, Lee Min-ho