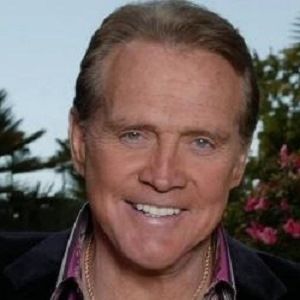 I don't want to try and still be Warren Beatty or whoever. A lot of guys think they can be leading men forever. And believe me, we all can't be

All the stories that I was jealous of her career are just a lot of crap, I was always 110% behind her and proud of her. There are times when I think that perhaps I created a monster. But then, deep down, I know that's just not true.

Who is Lee Majors?

Majors was born in Wyandotte, Michigan, the United States on April 23, 1939 aged (79). He is the son of Carl Yeary(father) and Alice Yeary (mother). His father was a manual laborer who died on the job before he was born. Whereas, his mother was a homemaker; she passed away in an auto accident before his second birthday.

Likewise, he also participated in track and football at Middlesboro High School. Then, he played his first football game in the following year but suffered a severe back injury which left him paralyzed for two weeks and ended his college athletic career.

Then, after of schooling, he also picked up the stage name Lee Majors as a tribute to childhood hero Johnny Majors who was a player and future coach for the University of Tennessee. He has a sibling namely, Bill Yeary. He belongs to American nationality and English ethnicity. His birth sign is Taurus.

On talking about his profession, during 1964, he appeared in his first, although an uncredited, role in the horror film ‘Strait-Jacket’. During 1965, his first credited role came in an episode of ‘Gunsmoke’. Eventually, he also appeared in an installment of ‘The Alfred Hitchcock Hour: The Monkey’s Paw – A Retelling’.

Whereas, his first big break happened in the hit ABC western series, ‘The Big Valley’ (1965-1969). Similarly, he also portrayed the role of Heath Barkley in the show. In addition, he also appeared in the 1968 Charlton Heston film ‘Will Penny’. Likewise, in 1969, he also starred in the lead role of a television film, ‘The Ballad of Andy Crocker’.

Additionally, from 1974 to 1978, ‘The Six Million Dollar Man’ became a weekly series and garnered huge international success. However, following some legal disagreements with Universal Television, the series was canceled in 1978. Meanwhile, during the late 1970s, he also continued to appear in films like ‘The Norseman’ (1978), ‘Killer Fish’ (1979), ‘Steel’ (1979), etc. During  1981, he also starred in the television series, ‘The Fall Guy’ in which he played the role of a Hollywood stuntman, Colt Seavers.

In addition, he won the Golden Boot Award, Moxie! Award for Best Actor for Here (2001). Similarly, he won TV Land Award for Superest Super Hero for The Six Million Dollar Man (1974). Additionally, he won Star on the Walk of Fame Award.

There is no information regarding his income, salary. Whereas, his net worth was around $ 15 million.

On talking about his body measurements, Lee has a height of 5 feet.  Additionally, his weight is unknown. Lee’s hair color is dark brown and his eye color is blue.