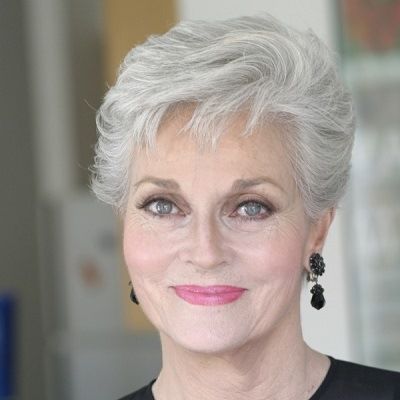 You know, I've been so incredibly lucky. One hears so many horror stories from actresses who test for role after role and never get anything. I've been working steadily for more years than I care to count. I definitely consider myself to be one of the lucky ones.

Well, basically, nice guys can finish last. He was really a wonderful man and a delight to work with and he loved his crew. He was very generous, they [the show's producers] adored him, and I firmly believe that they had the opportunity to go on to other more lucrative shows, but they chose to stay with us for eight years, which is highly unusual.

I loved working with Buddy Ebsen. I was so lucky to have been given that opportunity. Eight years with this lovely gentleman. It was an experience for which I will always be grateful. The chemistry between us was immediate. I met him in his dressing room for the first time and we talked later about that first meeting and how immediate it was that we knew we bonded then. And it was, it was so fabulous.

What is the relationship of Lee Meriwether?

Lee Meriwether was married to Frank Aletter (April 20, 1958 – 1974), but they got divorced. The couple had two daughters, Kyle Aletter-Oldham and Lesley A. Aletter.

Who is Lee Meriwether?

Lee Meriwether is an American actress and former model. She is known for winning the title of Miss America in 1955.

Likely, she is well known for appearing in the long-running 1970s drama series ‘Barnaby Jones as Betty Jones, a role that earned her an Emmy Award nomination along with two Golden Globe Award nominations.

Lee was born in Los Angeles, California, in the United States on May 27, 1935. Her birth name is Lee Ann Meriwether and she is currently 87 years old.

Her father’s name was Claudius Gregg Meriwether and her mother’s name is Ethel Eve Mulligan. There is not much information about her and her family.

She has a brother namely, Don Brett Meriwether. Lee holds American citizenship, but her ethnicity is unknown. Her birth sign is Gemini.

Talking about her profession, Lee Meriwether began her entertainment career with NBC’s ‘The Today Show’ in the mid-1950s. Her film debut came in the year 1959 when she was cast as Linda Davis in the sci-fi film 4D Man’. In the year 1961, she made a guest appearance on her then-husband Frank Aletter’s sitcom ‘Bringing Up Buddy’. This was followed by her guest roles in ‘The Lloyd Bridges Show’ and ‘I’m Dickens, He’s Fenster’.

Whereas, from 1963 to 1965, the actress played various characters in eight episodes of NBC’s medical drama series ‘Dr. Kildare’. During the 1970s, she featured in the television films Cruise Into Terror’ and ‘True Grit: A Further Adventure,’ and also appeared as a regular panelist on the popular game show ‘Match Game.

The next decade saw her in the revival of the 1960s sitcom ‘The Munsters,’ titled ‘The Munsters Today. Meriwether also had guest appearances in the drama series Fantasy Island’ and ‘The Love Boat’.

In the year 1993, Lee appeared in an episode of ‘Murder, She Wrote,’ titled “Ship of Thieves”. In 2002, she starred in the documentary ‘Miss America’.  Following a voice role in a video game titled ‘Metal Gear Solid 4: Guns of the Patriots.

Meriwether joined Bill Cobbs, Abigail Breslin, James Garner, and others in the drama film ‘The Ultimate Gift,’ which was released in 2006. She later reprised her role in the movie’s 2013 sequel ‘The Ultimate Life’.

The actress reunited with Cobbs onscreen in the direct-to-video ‘No Limit Kids: Much Ado About Middle School’ in 2010. She continues to act in films, television shows, and stage productions.

This actress won the Lifetime Achievement Award, she won Best Actress for In Memory (2015) at LAIFF October Award in 2015. She won Best Supporting Actress, Web series for Rising of the Catwoman (2018) at the Maverick Movie Award.

As of 2022, she has an estimated net worth of around $800k and she has earned that sum of money from her professional career.

Currently, there are no desperate rumors regarding Lee’s personal and professional life. It seems she is doing the best job without harming others for which she hasn’t been a part of controversy yet.

Lee Meriwether has a height of 5 feet 9 inches and she weighs is 64Kg. Additionally, she has a measurement of 34-22-35 inches and her bra size is 34B.

Lee’s hair color is grey and her eyes color is blue.