LeeAnne Locken is a reality TV star who was seen in The Real Housewives of Dallas. She is married.

LeeAnne Locken is a married woman. She is married to her long-term boyfriend, Rich Emberlin. Her husband, Rich is also an actor and TV personality best known for his work in the movie, ‘Trafficked’.

The couple dated for over 8 years before getting engaged in October 2016 at Texas State Fair in Dallas. After a couple of years, they exchanged wedding vows on April 27, 2019, at the Cathedral of Hope in Dallas.

The ceremony was a big one and was featured in the Real Housewives of Dallas. This was her husband’s third marriage. Locken is the step-mother of Rich’s child from his previous marriage with Elise Emberlin.

Prior to her marriage to Rich, she had a sour relationship with her The Real Housewives of Dallas co-star, Cary Deuber in the second season of the show in 2017. 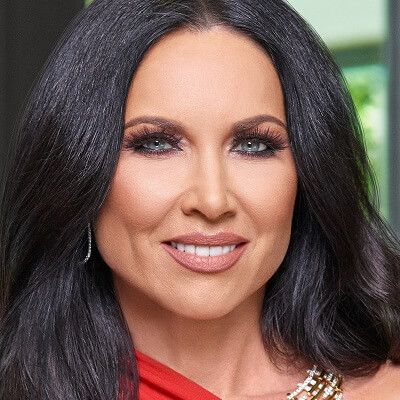 Who is LeeAnne Locken?

LeeAnne Locken is an American reality TV star. She is best known for her work in The Real Housewives of Dallas.

Similarly, there is no information about her siblings. She spent her childhood days in Houston with her grandparents. Her ethnicity is Caucasian.

Talking about her education, she went to a local high school in her hometown. After completing her high school studies, she joined the University of Houston and graduated from there.

In 2016, LeeAnne Locken came into the spotlight as one of the participants of the Bravo TV reality show, ‘The Real Housewives of Dallas’.

In the show, she starred alongside other popular names such as Cary Deuber, Brandi Redmond, Kameron Westcott, Tiffany Hendra, among others.

Her appearance in the show made her very popular and it still remains her best-known work to date.

She appeared in the first season which aired on April 11, 2016. After the 4th season of the show which aired in 2019, she departed.

Her acting debut actually came in the 1987 horror comedy film, ‘My Best Friend Is A Vampire’. Following that, she landed the role of Jenny in the short movie, ‘Watershed’ in 2012.

Some of her other acting credits include ‘Carter High’, ‘Chase’, ‘Beyond The Farthest Star’, etc.

She entered the 1989 Miss USA Pageant and made it into the top 10 of the competition.

She is also a writer and has written several Ebooks that are available on her own website. Her first book is titled ‘What’s Your Status?’

LeeAnne Locken: Net worth and Salary

After starring in The Real Housewives of Dallas for four seasons, Locken earned thousands of dollars. As of 2022, LeeAnne Locken has an estimated net worth of around $2.5 million. On average, a reality TV star in America earns around $45 k a year.

LeeAnne Locken stands at a height of around 5 feet 8 inches. Her hair color is black and her eyes are blue in color.

Her exact body measurements for breasts, waist, and hips remain unknown, but she has maintained an attractive body figure even in her 50s. She wears a shoe size of 7.5 (US) and her dress size is 6 (US) but her weight is 65 kg.

LeeAnne Locken used to call one of her co-stars on the show, The Real Housewives of Dallas, Kary Brittingham a ‘chirpy Mexican’ and referenced her nationality every time she talked about her.

Kary was a target of her horrific verbal attacks in the fourth season. For this, she was branded a racist by many and she received a major flack from fans of the series for the racial slurs she used.

Andy Cohen called her comments “vile” and “disgusting.” She later apologized with an Instagram post that she had no intention of hurting anybody.

You may also like to read the Bio, Career, Body Measurements, Net Worth, Social Media, and more about Kameron Westcott, Anne Hathaway, James Franco, etc.