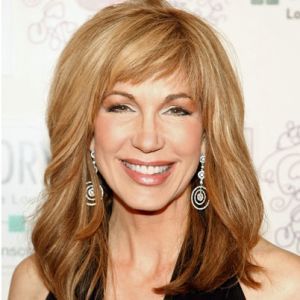 What is the relationship of Leeza Gibbons?

Leeza Gibbons is a married woman as of now. She has been married four times until now. Currently, she is wedded to Steve Fenton. They shared the marital vows on April 20, 2011.

Steve is a famous writer, actor, and producer. They still are a happily married couple.

Before this, she was married to actor, Stephen Meadows.

They got married on February 14, 1991. Together, they lived a happy marital life until their divorce in 2005.

They have two children. Their first child is a boy named Troy, born on February 13, 1992.

Prior, she was married to actor, Chris Quinten from 1989 to 1991. They have a daughter together named, Alexandra.

Previously, she was married to John Hicks. The wedding ceremony happened in 1980. But later they separated.

Who is Leeza Gibbons?

Additionally, she is also a radio show host. She possesses American nationality. She is active professionally since 1976.

Notably, she is famous for her work on the show, Entertainment Tonight from 1984 to 2000.

Furthermore, people also know her as the host of her own daytime talk show, Leeza. Recently, she also co-hosted the Rose Parade in 2017.

Leeza Gibbons was born in Hartsville in the state of South Carolina.

The name of her father is Carlos Gibbons.

Her parents had an antique shop. Although she was born in Hartsville, she grew up in Irmo in South Carolina.

For her education, she attended Irmo High School

Due to a lack of information, we don’t know about her childhood, and ethnicity as of now.

Leeza Gibbons has been in the entertainment industry since 1976.

In the initial stage, she used to work at WSPA-TV in South Carolina and at KFDM-TV, and WFAA-TV in Texas.

There, she co-hosted the Two on the Town with Robb Weller. Then the next year in 1984, she became the host of the show, Entertainment Tonight. Robb Weller joined her again to host the show.

She worked for the show as a reporter and co-anchor till 2000.

In the meantime, she also hosted her own NBC daytime talk show, Leeza.

Previously in the 1990s, Leeza was the host of the radio show, Blockbuster Top 25 Countdown with Leeza Gibbons.

During the early 2000s, she also released her own mineral makeup line, Sheer Cover Studio.

Additionally, she has also released several infomercials until now. Some of them are Dr. Denese Skinscience, Personal Power 2, and Get the Edge.

Currently, she earns a massive amount of salary.

Therefore, she is able to make an estimated net worth of around $40 million.

Leeza Gibbons stays away from any controversies.

Although she works in the media industry, she tries to keep herself away from any negative spotlight in the industry.

Subsequently, she is not part of any significant criticisms, rumors, or controversies.

Leeza Gibbons has a gorgeous body.

She has an average height of 5 feet 8 inches. Similarly, her weight is around 65 kg. And she has a slim body figure.

While she has blonde hair, she has dark brown eyes. Her body figure measures around 37-26-38 inches.

Presently she has more than 108k and 38.9k followings on Twitter and Instagram respectively. Similarly, she has around 108k followers on Daryl Wein.