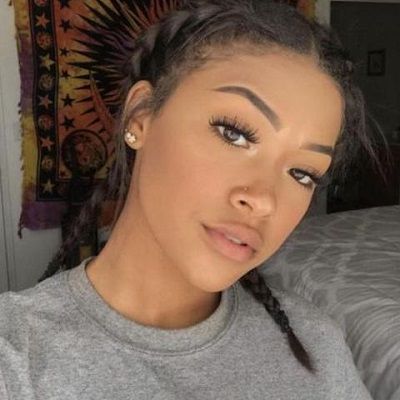 Leilani Castro is currently in a relationship. He started to date another media star Reed Woehrle in the year 2019. Reed is also a TikToker who has more than 2.3 million followers.

They first met through the Tik Tok app and since then they regularly appear on each other’s social media posts. This couple even officiates their affair in social media only.

Who is Leilani Castro?

Leilani Castro is an American social media personality. She is known for her content on social networking site TikTok where she posts videos related to lip-sync.

She was born on Aug 17, 2001, in the United States as Leilani Green. Her mother’s and father’s names are not known but she has a younger sister.

As per education, she is studying in a high school.

Similar to TikTok star Sondre Rodriguez, Leilani is also a TikTok personality who posts amazing lip-sync videos under the name leilaniii2. She posted a song Slayed by Kodak Black in her account which is loved by the viewers.

Her videos are loved by her more than 6 million followers.

Castro also has a YouTube channel which was created on Nov 12, 2019. This channel is called Itsleilaniii has around 81.7k subscribers. The contents include tutorials, pranks, challenges, and reaction videos.

Her first video uploaded was titled California Vlog. In it, she shared her experience when she was a time in California.

Talking about earnings, this Tik Tok personality has an estimated net worth is $500 thousand.

As per brand endroesement, Leilani has endorsed HiSmile.

Talking about Leilani Castro’s body features, she has dark brown eyes and black hair. She has a height of 5 feet 7 inches and a weight of 55 kg.

In addition, she has piercings on her belly, tongue, nose, and earlobes.