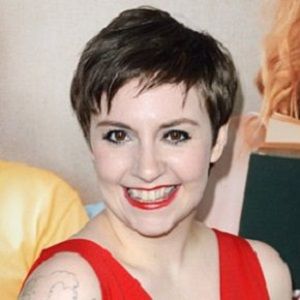 Every time I start feeling sexy I trip

It's interesting how we often can't see the ways in which we are being strong - like, you can't be aware of what you're doing that's tough and brave at the time that you're doing it because if you knew that it was brave, then you'd be scared

I can play very annoying girl, very lost girl and then all the things in the spectrum between.

Lena Dunham’s relationship status is married. A per the primary sources she in Sep 2021, exchanged vows with Luis Felber.

They first met on a blind date where they kept knowing each other for eight hours long. For the last four months, this lovely couple is staying together, and finally, they tied the knot.

However, the details of their wedding are not yet shared.

Lena in the past was in a relationship with the famous American musician Jack Antonoff. The couple met on a blind date in 2012.

Unfortunately, they called this affair off after five years in 2017.

Who is Lena Dunham?

Lena Dunham is an American actress, writer, producer, and director. She is best known as the creator, writer, and star of the HBO series Girls (2012–2017), for which she has received numerous Emmy Award nominations and won two Golden Globe Awards.

She is the first woman to win the “Directors Guild of America Award for Outstanding Directing – Comedy Series” in 2013.

Lena Dunham was born on 13 May 1986, in New York City, New York, USA. Her nationality is American and she is of Ashkenazi Jewish, English, Scottish, Welsh, and German ethnicity.

Her father, Carroll Dunham is a painter and her mother, Laurie Simmons is an artist and photographer and a member of The Pictures Generation.

She has a young sister named Grace Dunham, who is also a writer.

Dunham attended Saint Ann’s School in Brooklyn, where she met Tiny Furniture actress and future Girls co-star Jemima Kirke. As a teen, she won a Scholastic Art and Writing Award at her school.

After that, she attended The New School for a year before transferring to Oberlin College. She graduated from Oberlin College in 2008 with a degree in creative writing.

Lena began her career at a very young age. While a student at Oberlin College, she produced several independent short films and uploaded them to YouTube. She made her debut as a professional writer, director, and actor in the 2006 short movie Dealing, in which she appeared as Georgia.

In 2007, she wrote and directed the TV film Tight Shots, in which she played the main role. In 2012, she began writing the TV series Girls (2012-2017) and played the lead role of Hannah Horvath. She is also the creator, director, and executive producer of the series. For her work in the series, she won the “Directors Guild of America Awards for Outstanding Directing – Comedy Series” in 2012. She also received numerous Emmy Award nominations and won two Golden Globe Awards.

Lena has worked on several movies and TV film projects. In 2015, Dunham co-founded Lenny Letter with Jenni Konner. In 2014, she hosted an episode of Saturday Night Live on March 8, 2014, with musical guest The National. She has graced the cover of many popular magazines, including Vogue, Elle, Marie Claire, and Rolling Stone. In 2012, she was seen in a video advertisement promoting President Barack Obama’s re-election, In April 2016, she wrote in support of Hillary Clinton.

Lena Dunham: Salary and Net Worth

She has accumulated a net worth of $12 million. As a salary, she charges around $150k per episode.

Lena has been criticized several times for being a racist. She also got criticism on social media claiming her tweet was racist. Currently, there are no desperate rumors regarding his personal and professional life.

Lena Dunham has a height of 5 feet 3 inches and her body weighs 63kg. She has blonde hair and Light Brown eyes.

Also get to know more about Andrea Arnold, Brandy Norwood, and Adam Sandler.

Meet Luis Felber, Boyfriend Of Lena Dunham; She Shared The Sweet Tribute To Him On His Birthday!