Oscar-winning versatile actor famous for “Titanic,” “The Wolf of Wall Street,” “Blood Diamond,” “The Aviator,” and others.

Leonardo DiCaprio has been in several relationships until now. Recently in 2017, he dated model, Lorena Rae. Before that, he was in a relationship with another model, Nina Agdel.

In 2016, he also dated Chelsea Weimar. In the same year, he even dated Kelly Rohrbach. Back in 2015, he had a short time affair with the singer, Rihanna. From 2011 to 2012, he was in short-term relationships with Blake Lively, Erin Heatherton, Barbara Palvin, Tony Garnn and others.

Before that, he was in a long time relationship with Bar Refaeli. Bar Refaeli is an Israeli actress/model and a businesswoman. According to rumors, he was in alleged affairs with Paris Hilton and Carmen Electra in 2000.

Similarly, he was in an unsuccessful relationship with other women like Demi Moore (1998-2002), Natasha Henstridge (1997), Kristen Zang, Bridget Hall, Heather Graham, and others. 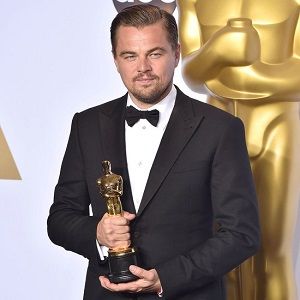 As a little kid growing up in Hollywood, I was called 'a little crazy'. And now I guess I'm still that way.

I like to help the whales, the otters, and the dolphins. When I'm acting and I take a break, the first thing on my list is spending time by the sea.

I cheated a lot, because I just couldn't sit and do homework. I usually sat next to someone extremely smart.

On his life: What I would do in order to be popular was, I'd put myself on line and joke around and be funny, and I was always known as the crazy kid.

I hate speaking in front of a large audience. I don't know where it came from... but its just this gut-wrenching fear of slipping up and doing something horrible.

Who is Leonardo DiCaprio?

Presently, he is notably famous for films like “Titanic,” “The Wolf of Wall Street,” “Blood Diamond,” “The Aviator,” and others. His nicknames are ‘Leo’ and ‘Lenny D.’ He won Oscar for his role in “The Revenant” in 2016.

Leonardo DiCaprio was born in Los Angeles, California. He was born on November 11, 1974, as Leonardo Wilhelm DiCaprio. The name of his father is George DiCaprio. And his mother’s name is Irmelin Indenbirken. While Irmelin is a legal secretary, George is an artist/producer of comic books.

Leonardo is of German ethnic background from his mother’s side. And he has Italian ancestry from his father’s side. He also has Russian descent.

The name ‘Leonardo’ came from the incident when his mother was pregnant. While his mother was looking at Leonardo da Vinci Painting, he kicked for the first time. This got his name as Leonardo.

He spent his childhood with his mom after his parents separated. During their early years of his youth, he also lived in German with her grandparents.

For his education, he studied at Seeds Elementary School and ‘Los Angeles Center for Enriched Studies.’ Afterward, he enrolled at John Marshall High School. Later, he dropped out.

Leonardo DiCaprio started his career with some commercials and educational films in the children’s series, “Romper Pomper.” This was in his early days when he was five years old.

Talking about his TV debut, he appeared in 1989 in two episodes of “The New Lassie.” Then in 1990, he acted in television series like “The Outsiders,” “Santa Barbara,” and “Parenthood.”

Similarly, in 1993, he also acted in another film, “What’s Eating Gilbert Grape” alongside Johnny Depp. This portrayal of ‘Arnie Grape’ raised him to fame. Furthermore the roles like ‘Jim Carroll’ in 1995’s “The Basketball Diaries” and ‘Romeo Montague’ in 1996’s “Romeo+Juliet” made him a top actor.

Then in 1997, he portrayed ‘Jack Dawson’ in “Titanic.” The film’s success and his acting made him a fan’s favorite. After that, he gave multiple commercially successful and critically acclaimed films from 2000 to 2008. They are “The Beach,” “Catch me if you can,” “The Aviator,” “The Departed,” “Blood Diamond,” and “Body of Lies.”

He acted in “Shutter Island” and “Inception” in 2010, “The Great Gatsby” in 2013. The role of ‘Jordan Belfort’ in his dream project, “The Wolf of Wall Street,” earned him his fifth Oscar nomination.

He played ‘Hugh Glass’ in “The Revenant” in 2015. This earned him his first Academy Award (Oscar) and third Golden Globe award.

He is the founder of the Leonardo DiCaprio Foundation. The organization works for the conservation of the environment. In 2016, he appeared in a documentary about climate change named “Before the Flood.”He is a six-time Academy Awards, four-time British Academy Film Awards nominee.

He earned nine Screen Actors Guild Awards and eleven Golden Globe nominations.  Leonardo is the winner of 54 awards including three Golden Globes and one Academy, BAFTA, and Screen Actor Guild each.

As a producer, he made many films. They are “Runner Runner,” “Out of Furnace,” “Red Riding hood,” and others.

Leonardo DiCaprio: Salary and Net Worth

His approximately net worth is around $ 245 million.

Leonardo DiCaprio made controversy when he refused to show transparency on his Foundation’s financial transactions. This happened in 2016 resulting in several parties forcing him to return donations received for rainforest charity.

In 2016, rumors suggested that he had affairs with Paige Watkins, Georgia Fowler, Roxy Horner, and others.

Leonardo DiCaprio looks so young and energetic in his forties. He is six feet tall and approximately weighs around 75 kg. He has a Chest of 42 inches, a Waist of 34 inches, and biceps of 14 inches. While his eyes are blue and his hair is blonde.