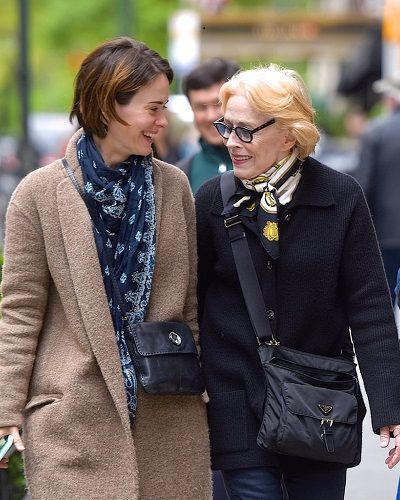 An American actress who is renowned for her roles in television series like American Gothic and Jack & Jill, Sarah Paulson reveals the reality of her relationship with Holland Taylor. Holland is a veteran actress who won Emmy Award for Outstanding Supporting Actress in the year 1999 for her ABC drama, The Practice.

46, Sarah, and 78, Holland is in a gay relationship with each other. They went public about their affair in the year 2015.

When asked a question to Sarah on her relationship said,

“What I can say absolutely is that I am in love, and that person happens to be Holland Taylor.”

How did this gay couple meet?

What Women Want actress Sarah and Bess in Breakfast with Les and Bess actress, Taylor met for the first time in the year 2008 at a dinner party. Taylor was head over heels by Sarah’s beauty and said she is,

“probably the most exquisitely beautiful woman I’d ever seen.”

Since then their friendship blossomed and gradually they became romantic partners. They are often seen in public places and events like lunch or dinner dates, red carpets, etc.

Also recently on May 6, 2018, they were seen having a great nighttime together in New York. And Sarah expressed her love life,

“On one hand, when you’re in a relationship that makes you happy, you would be telling anyone who wanted to know about it. On the other, there’s a sort of… meal of it for people. That’s not my favorite thing. But I don’t want to spend my life jumping from shadow to shadow.”

This was a great night and one that went by so fast, I never really had a chance to take it in. Today we are using our collective voices to shine some much needed light on issues that have affected all of us in some form or another, and I just wanted to take a moment and also say that today is a celebration of what drives us creatively… so congratulations to all the nominees and I hope you all take the time to savor these moments, as they are rare indeed. #timesup @goldenglobes

You may like to read The family, business, career, and relationship history of Hassan Jameel, singer Rihanna’s current boyfriend!

What is Sarah engaged in?

The versatile and phenomenal actress Sarah has starred in the movies like 12 Years a Slave, Carol, Path to War, etc. She is now going to be engaged with her new project with Ryan Murphy’s new series titled, Consent.

It is based on Hollywood’s #MeToo and Time’s Up movements. People are eagerly waiting for the series as it is based on such an amazing concept and the creator is said to be controversial.

Aussie actress Yvonne Strahovski is pregnant with her husband, Tim Loden! She shared a picture of her with baby bump on Instagram
Tags : Actor