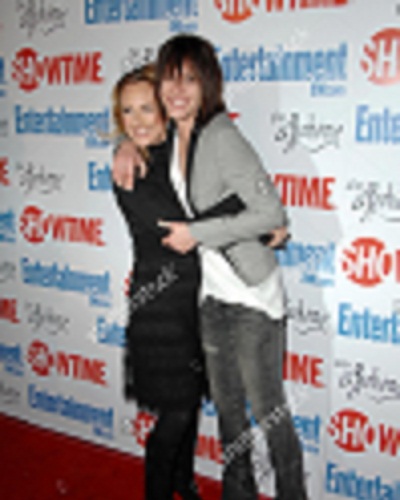 Being lesbian or gay does not mean that they are different. It is normal. We can not change what actually they are from the inside. With the presence of the bond between a man and a woman, there also exists the relationship between a lady and a woman.

Following the same trend actress Katherine Moennig has fallen in love with a same-sex partner which her fans are eager to know about her existing relationship with her girlfriend.

Let’s dig deep into her personal life to know in detail!!!

Has she thought to marry same-sex?

Katherine Moennig has forever remained in controversy for dating several stars in the past. She was in the news for dating Evan Rachel Wood, who had just split with her husband, Jamie Bell.

The source reports the initiation of rumors in the year 2011. However, in the year 2013, they were caught flirting with one another via their respective social media.

Katherine and Evan were spotted walking hand in hand at the star-studded party of the ammer Museum’s Gala in the garden.

The insider, as reported by the dailymail.co.uk, revealed the entire scenario which occurred between Katherine and Evan during the whole event.

“Evan Rachel Wood arrived with Kate Moennig. They were holding hands and looked very much like a couple.”

Though the pair had not confirmed their relationship, a source has disclosed to hollywoodlife.com about their budding romance of two months.

“They’re really into each other. It seems like something that may last awhile.”

While the source reports Dailymail.com about the feelings, Evan had for Katherine.

“Evan is crazy about Katherine. She had a crush on her for years but now can act on it. The age difference doesn’t bother her at all either. She thinks they make an amazing couple. She is head over heels, and Katherine feels the same way.”

Right after the revelation by the source, they were caught by the paparazzi snuggling outside the Real Food Daily restaurant in West Hollywood, California on October 24, 2014.

They are caught by camera many times together

Even though the paparazzi often caught them together in several places, neither Rachel nor Katherine have posted any cozy pictures of them on their social media account.

At present, the actress is no longer together with Evan Rachel Wood as Evan is said to have engaged to her musician boyfriend, Zach Villa in January 2017.

Neither Rachel nor Katherine have spelled out their reason for the separation. However, when scrolling through the social media of Katherine, the lady is spotted together spending time with her girl gang and a woman named Leisha H.

So, there is a likely possibility for Katherine to be in a relationship with the lady, but to avoid media fuss, she is in no mood to confront it.

Also read ‘Shadowhunters’ and ‘The 100’ actress Lola Flanery’s Life! Read to know more about her parents

Katherine Moennig is an American actress known for her role as Shane McCutcheon on The L Word. She also played Jake Pratt on Young Americans. She was born on December 29, 1977, in Philadelphia, Pennsylvania. She has played the role of Lena in the Showtime series Ray Donovan since 2013. More bio…