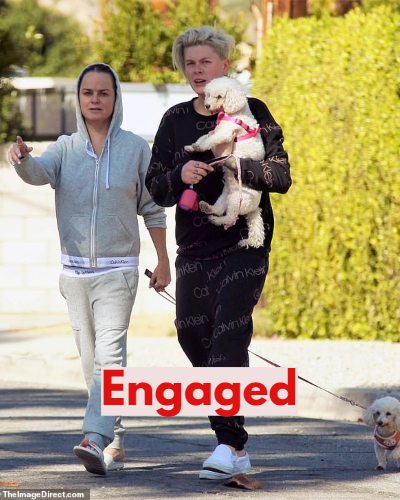 Orange Is the New Black star Taryn Manning is officially engaged! Her girlfriend Anne Cline proposed to her on 11th June 2021 during a performance in Florida. The video, which was captured during Anne’s performance at a bar in Panama City showed that she hopped in front of her lover Taryn to surprise her.

She got down on one knee and opened a ring box and Tayrn was absolutely taken aback by the proposal. They kiss each other and a moment later, the newly engaged couple stands up and shares a sweet hug. They were cheered by the crowd present at the bar.

It was a cute proposal and they are thrilled. Similarly, Manning did not have to think for a second to accept the proposal and she said,

It was the easiest YES I ever said.”

Also, the couple was spotted walking together back in March and they have successfully kept the details of their relationship private.

How much is the net worth of Taryn?

Taryn Manning has an estimated net worth of $3 million as per Celebrity Net Worth. Her film work includes Last Call, The Murder of Nicole Brown Simpson, The Brawler, The Vault, Happy Yummy Chicken, A Winter Rose, Cleveland Abduction, Experimenter, Low Down, The Speed of Thought, and more.

Likewise, her TV series work includes At Home with Amy Sedaris, Worst Cooks in America, Hollywood with Tyler Henry, Hollywood Game Night, Orange Is the New Black, Hawaii Five-0, Drive, and more. Her singles are So Talented, Spotlight, Turn It Up!, Send Me Your Love, Roaming Unicorn, Summer Ashes, and more.

Taryn Manning is an American actress, singer-songwriter, and fashion designer. Similarly, Manning made her film debut in the teen drama Crazy/Beautiful (2001), followed by a lead part opposite Britney Spears in Crossroads. As a musician, Manning is the vocalist for the electronic duo Boomkat and is also a co-owner of the clothing brand Born Unicorn. Read more bio…

Is Kylie Jenner married? ‘Stormi, I love you and wifey, I love you’ – Travis Scott!
Tags : Actress Singer