Lesia Vasylenko is married. She has not disclosed anything regarding her private relationship and has kept her private life out of the spotlight. 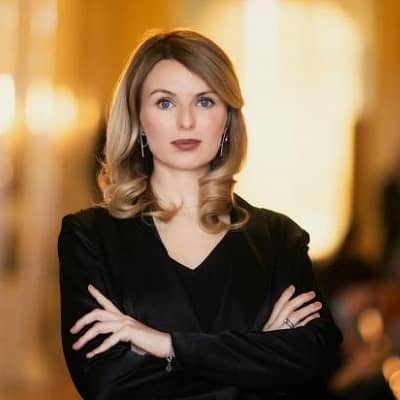 Who is Lesia Vasylenko?

Lesia Vasylenko is a lawyer and politician from Ukraine who now serves in the 9th Ukrainian Verkhovna Rada as a People’s Deputy.

Vasylenko is the president of the Inter-Parliamentary Union’s Bureau of Women Parliamentarians and a member of Ukraine’s permanent delegation to the Council of Europe’s Parliamentary Assembly.

She is the creator of Legal Hundred, a non-governmental human rights group that assists military and veterans.

She is the only child born to a human rights campaigner (father)Volodymyr Vasylenko and has no other siblings. Her mothers’ name is not disclosed yet.

She earned a master’s degree in international law from the Taras Shevchenko National University of Kyiv’s Institute of International Relations, and an L.L.M. from University College London.

Vasylenko was a corporate lawyer. She frequently protested at the Maidan Nezalezhnosti at the start of the Euromaidan revolution in 2013.

Lesia was affected by the wounded troops and their families after visiting a hospital during the battle in Donbas in June 2014. Many of the soldiers she spoke with said they couldn’t afford to pay for their medical care. She launched Legal Hundred, a human rights non-governmental organization that assists military and veterans, in January 2015.

Vasylenko was designated one of the top 30 under 30 young leaders in Ukraine by the Kyiv Post in 2016.

Lesia and Oleksandra Ustinova joined the Holos party in June 2019. Vasylenko was elected to the 9th Ukrainian Verkhovna Rada as a People’s Deputy of Ukraine in the 2019 Ukrainian parliamentary election.

Lesia armed herself with several guns to protect her family during the Russian invasion of Ukraine in 2022. On February 26, 2022, she declared that the Russian military was targeting the Ukrainian people in order to force the country to capitulate.

She moved her three children from her Kyiv home on March 1, 2022. She claimed that the invasion was the commencement of World War III in a Channel 4 interview on March 4, 2022.

Ukrainian MPs claim that the Russian military is rapping and hanging women who are unable to escape their cruel invasion. Some ladies over 60 have committed suicide after being accused by Putin’s soldiers of stopping the awful attacks.

Lesia Vasylenk, a Ukrainian MP, stated on Monday that Russian troops were torturing women and sexually assaulting girls as citizens continued to suffer the horrors of the war.

Lesia Vasylenko’s estimated net worth in 2022 is between $1 million-$5 million. However, she hasn’t revealed any information regarding her salary, income, and earnings.

Throughout her successful career, she never became a part of any controversial issue.

There is no information about Lesia’s height, weight, and other body measurements. However, she has a tall and slim body.

Moreover, she has a fair skin complexion with beautiful blue eyes and Light golden colored hair.