In an interview, Lesley Murphy is presently the contestant on the reality show, Bachelor Winter Games.

The news is that Chris Harrison, host of the show has teased her a surprising, romantic and beautiful marriage proposal.

Prior, she was dating Julian who she says has proven to be a great guy throughout the process of her breast surgery. 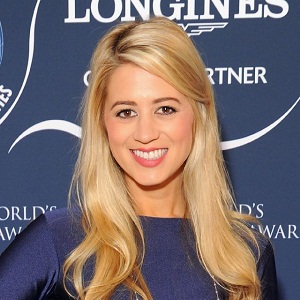 Who is Lesley Murphy?

She also shares her adventures and trips from around the world on Instagram with her 210,000 followers and counting.

Murphy was born Lesley Anne Murphy on August 19, 1987, in Arkansas, the United States of America.

Her nationality is American and her ethnicity is North American.

She’s originally from Arkansas. She has also lived and worked as a political consultant in the District of Columbia.

Her father is a doctor by profession, Dr. Vant Murphy. Her mother is a breast cancer survivor.

She had breast cancer 3 years back and is presently in remission. Lesley Murphy has 2 sisters; an elder and a younger one.

Lesley Murphy majored in broadcast news and psychology at the University of Georgia.

Lesley Murphy interned at the CNN TV channel.  Murphy was first seen on TV on the American reality television on the ABC, the dating game show, The Bachelor. She appeared as herself a contestant on season 17 of the reality series.

Murphy later appeared in the spin-off of The Bachelor, the ABC dating game show, reality TV show, The Bachelorette.

She appeared as herself a contestant on the ninth season of the show from May 27, 2013, to August 5, 2013. Murphy appeared in just two episodes of the show, competing for Desiree Hartsock. Chris Siegfried won the season.

She later turned a blogger, creating the luxury travel blog The Road Les Traveled. Murphy also shares her adventures and trips from around the world on Instagram with her 210,000 followers and counting. Her salary is not known to the mainstream media to date. Similar is the case of her estimated net worth value as well.

Lesley Murphy’s mother is a breast cancer survivor and had tested positive for the BRCA2 gene which predisposes her to breast cancer.

Lesley too was positive for this gene and has undergone a double mastectomy in April 2017 as a preventive step.

She also had breast implant surgery carried out in June 2017 and is doing well. Her elder sister has also tested positive for the cancerous gene and would be going ahead with this surgery once she finishes with her family.

Lesley Murphy: Salary and Net Worth

Lesley Murphy earns a net worth of $1 million-$5 million but there is no information about her salary.

There were rumors that Murphy was having a double mastectomy, which later turned out to be true.

Lesley has not been at the receiving end of critics much. Her father is proud of his little daughter and knows that she will also do the best things in life.

Lesley has blonde hair and brown eyes. Furthermore, there are no details regarding her body measurements.

Also get to know more about the birth facts, education, career, net worth, rumors, height, and social media of different personalities like Ashlee Holmes Malleo, Perez Hilton, and Ali Fedotowsky.