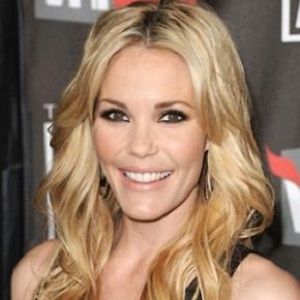 People get DUIs, people get in fights with their boyfriends, it happens, life happens, but it's about being accountable for your actions. I don't know. I'm just not that girl, I don't go to clubs. I'm a pretty normal girl.

I feel like if you're a girl in the South, you know 'Gone with the Wind' better than anything. Scarlett O'Hara is such a quintessential Southern woman.

I never think, Oh, I'm so beautiful. To me, feeling happy is more important.

What is the relationship of Leslie Bibb?

Leslie Bibb was in a relationship with Rob Born, an investment banker for several years.

They got married on November 22, 2003, in Mexico but their marriage did not last long. The couple divorced on December 7, 2004. The reason behind their divorce is unknown.

Leslie has been in a romantic relationship with the actor Sam Rockwell since 2007. He is an actor.

They have worked together in the movies Iron Man 2 and Don Verdean.

She is very happy with her current relationship and there is no sign of a breakup. The couple has been noticed kissing each other in public which shows that they are very passionate about each other.

Who is Leslie Bibb?

Leslie Bibb is an American actress and model. Leslie Bibb is widely recognized for the role of Brooke McQueen on the WB Network drama series Popular (1999-2001) and as Chloe Whitfield in the film The Skulls (2000).

Leslie was born on November 17, 1974, in Bismarck, North Dakota, and raised in Nelson County, Virginia.

Her father died when she was three years old and she along with her mother, Betty Blakemore Sulzbach, and three sisters moved to Richmond, Virginia. She was the youngest of four sisters and her older sister’s name is Christa Bibb.

She was interested in modeling so when she was 16, she took part in a nationwide modeling contest and won that contest as well.

She attended a Catholic high school, St. Gertrude in Richmond and she graduated from there in 1991.

She was a good dancer on her high school dance team. Later, she joined the University of Virginia but she did not complete her study as she moved to New York City to pursue her career in modeling and acting.

Bibb began her career as a model at the age of sixteen.

After the trip to Japan, she returned back to America and completed her education in 1991 and she moved to New York City for her full-time modeling and acting career.

She also attended the William Esper acting studio for three years. During that time, she appeared as a model in Maxim and FHM magazines. Leslie’s career as an actor began with a small role on the TV series Pacific Blue in 1996.

The same year, she appeared in a small role on the TV series Home Improvement. Her debut role in movies was in Private Parts where she played the role of WNBC Tour Guide.

In 1999, she appeared in the TV series Popular with her first lead role as Brooke McQueen in which she played the most popular and beautiful girl at Kennedy High School.

For her role in the series, she won the Teen Choice Award for Best TV Actress and was also nominated for Best New Face- Female.

Since then, she has acted in several films and series. She won the Best Actress Award for her role as Sarah Jane McKinney in the film Miss Nobody (2010).

Recently, she has appeared in taking Care and Don Verdean. In 2016, she was cast for the TV series American Housewife.

She was cast as the lead role in the web series WHIH Newsfront- With Christine Everhart (2015).

Leslie Bibb: Salary and Net Worth

She has earned a net worth of $4 million.

Talking about the rumors and controversy, there was a rumor that she has done alleged surgery on her cheeks later the rumor came out to be true.

Also, Bibb’s partner, Sam calls her his favorite person on earth and the news is that they are about to get married.

Bibb has an attractive body with a height of 5 feet 9 inches and she weighs 61 kg.

Her body measurement is 35-25-35 and wears a bra size of 34A. She has Green colored eyes and her hair color is blonde. Her dress size is 6(US) and her shoe size is unknown.

Also get to know more about the birth facts, education, career, net worth, rumors, height, and social media of different personalities like Jackie Sandler, Candice Bergen, and Maitland Ward.