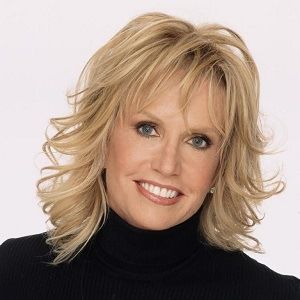 Leslie Charleson is a divorced woman. She married Bill Demms on April 1, 1988, but the marriage didn’t go well so they got separated on 1991.

Who is Leslie Charleson?

Leslie Charleson is an American actress and she is well known for her role as Monica Quartermaine in the ABC daytime soap opera General Hospital.

She was born in Kansas City, Missouri, the United States on February 22, 1945, and she is currently 74 years old. Leslie has not provided information regarding her parents and childhood.

She had a sister named Kate Charleson, who died in 1996. Leslie holds American citizenship, but her ethnicity is unknown. Her birth sign is Pisces.

On talking about her profession, her career began on short-lived ABC daytime soap opera A Flame in the Wind in 1964. During 1966 she joined the cast of As the World Turns’. However, from 1967 to 1970 she starred on the CBS soap opera, Love Is a Many Splendored Thing. She played the role of Iris Donnelly Garrison. Her character was a part of a highly popular love triangle with David Birney and Donna Mills.

Additionally, Leslie Charleson guest starred on the many series from 1970 to 1977, including Emergency! In addition, Charleson also had the leading roles in a number of unsuccessful television pilots. Therefore, in 1977, Charleson returned to daytime television with the role of Monica Quartermaine in the ABC soap opera, General Hospital.

Eventually, Charleson replaced Patsy Rahn as Monica, a doctor caught between her husband Jeff Webber and his back-from-the-dead brother, her true love Rick Webber. On August 24, 2010, it was announced that Charleson was being demoted to recurring status.

She was nominated for a Soap Opera Digest Award for Outstanding Supporting Actress four times for General Hospital (1963). Unfortunately, she has not been awarded for her work to date.

There was a rumor that Leslie Charleson who has played the role of Monica Quartermaine for 33 years, will now appear only on a recurring basis. The actress’ firing or demotion have been making the rounds for several years.

Leslie Charleson has a height of  5 ft. 6 inches and her weight is unknown. Leslie’s hair color is blonde and her eye color is hazel.

Also, read the affair, salary, the net worth, controversy, and the bio of Genie Francis, Nancy Lee Grahn, Lexi Ainsworth.