Leslie Easterbrook is an American actress. She is married to Dan Wilcox.

Leslie Easterbrook is a married woman. She is married to Dan Wilcox but their exact date of marriage is not available. The couple also has not shared any children yet. The couple is living happily and sharing quality time with each other.

Previously, she was married to Victor Halchak. The couple tied their knot on May 17, 1979, but they could not hold the relationship and end with divorce in 1988.

She has her own theater in Nottingham, England and she has named it as The Leslie Easterbrook Auditorium. 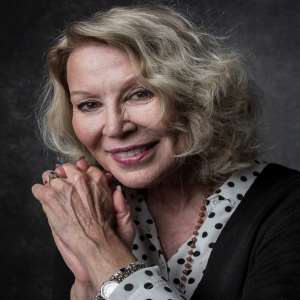 When I first started acting, I started in opera and had a great desire to play grand, tragic characters. I got sidetracked in musical theater and ended up doing a lot of comedy.

Mother Firefly is the kind of character I've always wanted to play. She's larger than life, terribly tragic, and capable of a lot of love.

I have fans all around the world.

Who is Leslie Easterbrook?

She was born on July 29, 1949, in Los Angeles, California, USA. Her birth name is Leslie Eileen Easterbrook and she is currently 72 years old. Leslie’s nickname is Bunny. She was adopted by Carl and Helen when she was just nine months old. She was raised in Arcadia, Nebraska.

Her mother was an English teacher and her father was a music professor at the University of Nebraska at Kearney. Leslie got lots of love and support from them and she never felt that she is an adoptive child. She has also taken trumpet lessons to play in the sitcom ‘Laverne & Shirley’. Her father wrote the Nebraska Navy Song.

Leslie holds American citizenship but her ethnicity is unknown.

She became recognized from her role as Rhonda Lee beginning with season 6 of ‘Laverne & Shirley’. Then, she appeared as Debbie Callahan in the ‘Police Academy’ movie series. After that, she made her appearance in ‘Murder’, ‘Baywatch’, ‘The Dukes of Hazzard’, The Devil’s Rejects’, ‘The Afflicted’, and many more. Leslie also recorded a song for the soundtrack of ‘Police Academy: Mission to Moscow’. She is also the member of a National Rifle Association and she has served on the board of directors of the California Rifle and Pistol Association.

Leslie is also a trained sports shooter and she has made a  video ‘Real Beginner’s Guide to the Shotgun Sports’ in order to encourage shooters for their first experience in shooting.

Along with that, she also supports charities like The Sunshine Kids, Girls, and many more. She sang the National Anthem at American football game ‘Super Bowl XVII’ and sang the song in the comedy film ‘Police academy: Mission to Moscow’.

She is often mistaken for actress Karen Black and she was chosen by Rob Zombie to replace Black in his ‘House of 1000 Corpses’ sequel, ‘The Devil’s Reject’ in 2005.

She has a height of 5 ft. 8 inches and weighs 69 kg. Leslie has light brown eyes and platinum blonde hair. Her body measurement is 39-27-39 inches. She has a voluptuous figure with a deep sultry voice. Her bra size is 36C.