Leslie Jones is an actress, comedian. Leslie is single, also low-key about her romantic life. 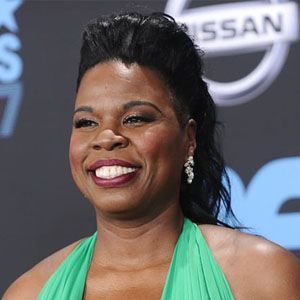 As soon as I touched the mic, I knew that's what I would do for the rest of my life.

Hate speech and freedom of speech are two different things.

I take care of everybody. I'm either hugging you or making sure that you're not sick because my backpack has every kind of medicine in it.

Leslie Jones has kept her personal life private and out of the spotlight. She usually doesn’t talk about her private life in the media and public.

Currently, she is in a relationship but she hasn’t revealed any information about her boyfriend.

Rumors were that she had an affair with Kyle Mooney. Leslie and Kyle were co-stars in Leslie & Kyle. However, they denied the rumors as they were not dating in real life.

Who is Leslie Jones?

Leslie Jones is an American actress, comedian. Leslie is also a cast member and writer on Saturday Night Life. Leslie Jones has been featured in a comedy festival ‘Just for Laughs‘ held in Montreal.

She has also been featured at Aspen Comedy Festival. Leslie has also starred in the 2016  supernatural comedy film Ghostbusters in the role of Patty Tolan.

As regards Leslie Jones’ Birth facts, she was born on 7th September 1967 in Memphis, Tennessee. Leslie’s father served for the US Army. She had a sister Rhonda Jones and a brother named Rodney.

But her brother passed away. Besides these her father and mother’s names are unknown. Her father was the one who encouraged her to play basketball. Leslie is an American by Nationality and holds African-American ethnicity.

She enrolled at the university on a basketball scholarship. But later she transferred to Colorado State University. The reason behind her transfer was her coach who left Chapman for Colorado State.

She intended to become a lawyer. Later she changed her mind and kept on changing her major subjects. She was involved in business accounting and computer science but later she majored in communications.

Leslie Jones started her career in 1987. Her first show was a comedy show at her college where she had won the title Funniest Person on Campus.

She worked in different pubs and also worked as a DJ when she shifted to Colorado State University. Later she opened up with an American actor Jamie Foxx, but the audience showed their disapproval of her. Due to this act, she was discouraged so she had left the comedy show for 3 years.

In 2008 she had joined  Katt Williams’ It’s Pimpin’ Pimpin’ tour. In 2013, she had given an audition on Saturday Night Live. In 2014, she was promoted to the cast as a featured player and made her official debut episode hosted by Jim Carrey.

She had appeared in Chris Rock’s directing debut, Top Five; Rock has said a follow-up is in the works, telling Complex Magazine, “Some people really shine in Top Five.

In 2015, Jones appeared in the Trainwreck. In 2016, she starred in the movie Ghostbusters. She portrayed the character of Patty Tolan.

The same year she appeared in an ad campaign with  American actor Adam DeVine for Allstate Insurance. She made her hosting debut on June 25, 2017. She hosted the BET Awards.

Leslie Jones has a net worth of $5 million. Besides that, her salary is unknown as she has not disclosed any information.

As per Leslie Jones rumors and controversy, she claimed that L.A.’s Ritz-Carlton Doesn’t Like Black People. After her hosting on Sunday’s BET Awards in Los Angeles. She had her tweet on Monday On July 27, 2017.

She tweeted:- “Wow was such a great night at the BET awards. But then had THE WORST STAY @RitzCarlton DO NOT STAY THERE!! THEY DONT LIKE BLACK PEOPLE!!”

She expressed her negative experience during her stay at the Ritz-Carlton in downtown Los Angeles. But an hour later the company apologized to Jones via Twitter.

Leslie Jones has a height of 6 feet. Her body weight is 78 kg. As per her body measurement, her bra size is 34A. Her waist size is 25 inches.

When she smiles, cute dimples show on her cheeks.

Similarly, her hip size is 34 inches. She has black hair and brown eye.

You may also like to read Sunny Hostin, Sarah Baeumler, and Thora Birch.