Rose to prominence from her role in the 1996 film The Cable Guy. 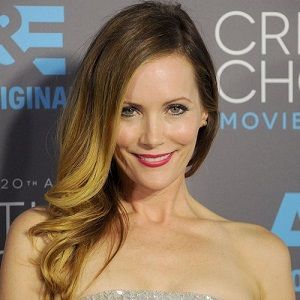 There aren't good roles for women: the female parts aren't developed: the women are serving the men

Women do not like CDs of live music. We only like the original recordings. If a song sounds different from the version we fell in love with, then it's awful.

Leslie Mann is a married woman. She tied the knot with her longtime boyfriend Judd Apatow on June 9, 1997, after dating each other for a couple of years. Together, the couple has two daughters Iris Apatow and Maude Apatow.

Since their marriage, the couple has maintained a sound relationship between them and never involved in any disputes. Moreover, she has never been spotted with any other man.

So far, she has been so loyal to her husband and never involved in any affairs.

Talking about her past relationship, there is not any information regarding her relationship. Currently, Leslie and Judd are enjoying their married life and living elegantly.

Who is Leslie Mann?

Leslie Mann is a famous American actress and comedian. She rose to prominence from her role in the 1996 film The Cable Guy.

Furthermore, some of her notable movies are Longtime comedy actress whose credits include Knocked Up, 17 Again, Funny People, Vacation, The Other Woman, and The 40-Year-Old Virgin.

Furthermore, she has won a couple of awards including the CinemaCon Award and Golden Schmoes.

Leslie was born on March 26, 1972, in San Francisco, California, USA. Talking about her nationality, she is American and her ethnicity is mixed (Irish, Scottish, German, and Finnish).

She grew up in Newport Beach with his mother who was a real state agent and married three times.

During his teenage, she was so shy. Moving towards her education, she completed her graduation from Corona del Mar High School and also pursued acting at the Joanne Baron / D.W. Brown Studio.

Later, he joined a college but dropped out before graduating.

Leslie Mann began her acting career at the young age of 18 when she was featured in a couple of television commercials. She came into the spotlight as she appeared in 1996 The Cable Guy.

Later, she has also worked in several hit films such as Big Daddy with Adam Sandler, The 40-Year-Old Virgin with Steve Carell, and few more. Furthermore, she has also appeared alongside Brendan Fraser in George of The Jungle and Orange County opposite Jack Black.

Back in 2007, she also starred in Judd Apatow’s comedy Knocked Up along with Seth Rogen and Paul Rudd. Additionally, her role in Knocked Up also earned a “Best Supporting Actress” nomination from the Chicago Film Critics Association. Besides this, the movie received the People’s Choice Award for “Favorite Movie Comedy”.

In addition, Leslie has also shared the screen with Zac Efron and Matthew Perry in the hit comedy 17 Again which crossed $125 million worldwide. The veteran actress has also played in the indie hit I Love You Phillip Morris opposite Jim Carrey and Ewan McGregor. Later in 2011, she featured along with Ryan Reynolds and Jason Bateman in the comedy The Change-Up.

Apart from that, she has also featured vocal performances by Jamie Foxx and Anne Hathaway followed by Jonah Hill’s animated FOX television series Allen Gregory. Recently, Leslie also played in several movies including The Comedian, How to Be Single, Vacation, and few others.

Besides this, the 46-year-old actress has appeared in a couple of TV series such as The Simpsons, Modern Family, Hercules, Freaks and Geeks, and few others. In addition, she alongside her husband Judd Apatow regularly took part in charity and donations.

As of now, Leslie has won a couple of awards including the CinemaCon Award and Golden Schmoes.

Being a successful actress, she pockets a handsome amount of money from her profession. Currently, she has a net worth of $150 million.

Leslie Mann has a height of 5 feet 7 inches and weighs 54 kg. Moreover, she has a pair of gorgeous blue eyes and blonde hair.

In addition, her other body measurements include 34 inches bra size, 23 inches waist, and 34 inches hip size.

Demetria McKinney
Tags : American Actress Knocked Up The Cable Guy The Other Woman

Death! British actor Leslie Grantham was in poor health and fighting for his life in a UK hospital!