Leslie Satcher is a musical artist. She is a writer and singer. She is a married woman. 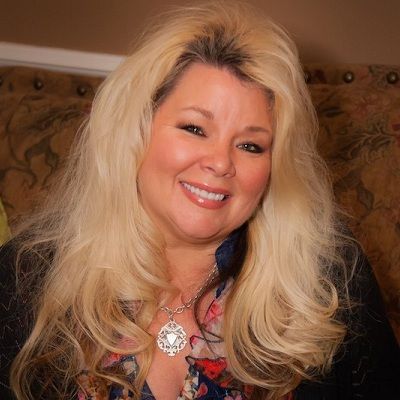 If I were to stand on the moon and could have only one record to listen to, I would hope it would be a Gene Watson record

'Gene Watson is one of my country heroes

Leslie Satcher married David Allen who is a great manager and music industry man. In 2003, she met the love her life, David of Longview, Texas, while appearing at the annual benefit for the East Texas Angel Network.

The two artists stay busy between family and friends in Texas and Australia, going to church, and enjoying time together at home and the beach.

Who is Leslie Satcher?

Leslie Satcher is an American Singer-Songwriter. She is known for her outstanding vocals. She has recorded two of her albums and has co-written several singles for several artists.

Born in 1962, she is around 58 years old. Her birthplace is Paris, Texas, United States of America.

She grew up along with her baby sister Jeannie Winn and two parents. Leslie was known to be hardworking ever since she was little.

She spent most of her childhood singing in churches and the schools of Paris, Texas. Details about her ancestry and academics are not disclosed.

Leslie constantly performs internationally as well as national and is often found doing benefits for those less fortunate with friends Vince Gill, Paul Overstreet, Amy Grant, and others while also maintaining a heavy songwriting schedule at Notting Hill Music with them. During a short trip to Nashville in 1989, A friend of Leslie decided to promote her by recording her voice over the tracks of country standards at The Barbara Mandrell Museum. That was pretty much all that it took.

It wasn’t after several days that, Her talent as a songwriter was recognized by a friend from church, Guy Penrod of the Gaither Vocal Band, an American southern gospel vocal group, who encouraged her to show her work to friends Larry Strickland and Naomi Judd.

Naomi helped her sharpen her skills and then introduced her to Don Potter, a guitarist who was starting a new publishing company.

After that, the idea of writing for a living flourished for Leslie even though the company never came around. One day at Bluebird cafe, Leslie teamed within 1989, during a short trip to Nashville, a friend prompted Leslie to record her voice over the tracks of country standards at The Barbara Mandrell Museum.

The company never came about, but the prospect of writing for a living blossomed for Leslie. After a Sunday night show at the world-famous Bluebird Café, Leslie teamed with Max D. and Max T. Barnes, accomplished father and son songwriters. A writing contract with the then-new publishing company Island Bound Music made.

Satcher is a very capable songwriter and has the elite status of receiving multiple BMI “Million-Air” awards. Moreover, her phenomenal vocals contribute to an astounding number of Grammy, CMA & ACM award-winning projects.

According to Forbes’s latest report published in March 2019, Leslie Satcher’s net worth is approximately $14 Million in 2020.

Her primary net worth and income come from being a Songwriter-singer.

Leslie Satcher is approximately 5 feet 1 inch tall. She is somewhat stout in body structure. Her eye color is blue and her hair color is brown. Information regarding her weight is unknown.