Lester Holt is an Anchor for NBC Nightly News and dateline nbc. Lester is married to his longtime girlfriend and has two children from his wife.

Lester Holt is a married man. He is in a marital relationship with Carol Hagen. The adorable couple got married on May 8, 1982. Together they have two sons.

Their names are Stefan Holt and Cameron Holt. Stefan was born in Chicago, Illinois. He also works for WNBC like his father. He is an anchor at WNBC. On September 5, 2017, Stefan’s wife gave birth to a little one and Lester Holt has become a proud grandfather.

The couple has been together for 35 years and still, there are not any rumors of divorce and dispute between the pair. 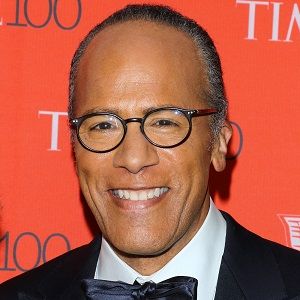 You have to go where the story is to report on it. As a journalist, you're essentially running to things that other people are running away from

Not to get too deep on shaving my mustache, but it was kind of symbolic of, 'This is a moment of liberation, a chance to reinvent yourself.' That's kind of what I did.

Who is Lester Holt?

Lester Holt is a famous veteran journalist. Lester Holt is currently working on the NBC network. Presently, he works as the anchor of the weekday edition of ‘NBC Nightly News.’

Previously, he worked for CBS News from 1981 to 2000. His recent notable work is moderating U.S. Presidential Debate in 2016.

Lester Holt was born in Marin County in the state of California. He was born Lester Don Holt Jr. on March 8, 1959. Lester’s nationality is American and ethnicity is mixed(Jamaican, English, Scottish, and Indian).

His father’s name is Lester Don Holt, Sr. and he worked as an Airforce technician. Similarly, his mother’s name is June DeRozario.

He has a half-brother called Mike Swanigan who used to work as an employee of a radio station in Alaska.

As per his education, he attended Cordova High School in Rancho Cordova, California. He used to do daily announcements on the public address system in his school.

Even while in high school and 16 years old, he was so keen on a career in journalism that he talked his way into an internship at KCRA TV station. Then in 1977, he graduated from high school. Afterward, he joined California State University in Sacramento.

He studied government there but failed to graduate since he got a job at KCBS radio. He would reach accident scenes faster than the rest of the crew and derived the name of ‘lightning bolt Holt’.

Lester Holt is active in journalism since 1981. In 1981, he started working for the CBS network. During his tenure at CBS, he worked as a reporter and anchor. He worked in shows including coverage like Iraq, Somalia, and Haiti.

In 2000, he joined MSNBC. He was nicknamed ‘Iron Pants’ here since he had the ability to stay focused and vigilant in spite of long working hours.

After around three years in 2003, he started working as a substitute anchor for “NBC Nightly News” and ‘Today’.

Afterward, he hosted, and reported several shows like ‘Weekend Today’, ‘2008 Olympics’, and ‘9/11 conspiracies theories’. Some of his notable works are moderating U.S. Presidential debates, news on the Iraq war, and so on.

Furthermore, he has appeared in several TV shows and movies as a reporter and anchor. They are “House of Cards,” “Primal Fear,” “30 Rock”, and others.

Presently, NBC pays him a good amount of money as a salary. His salary is projected at around $ 4 million per year. A veteran journalist like him must have earned a fortune from his profession.

Consequently, he has made an estimated net worth of around $12 million as of 2022.

Lester Holt focuses on his work. But he has been part of criticism and controversy. Previously during the U.S. Presidential Campaign debate, people condemned him for favoring Hillary Clinton.

Similarly, he discusses a lot of political matters on his show. Eventually, it brings him to the radar of controversies. Other than that, there are no major rumors or controversies about him as of now.

Lester Holt has maintained his body. He stands tall at a height of 6 feet 2 inches. Similarly, his body weight is around 71 kg. He has dark brown eyes and hair.