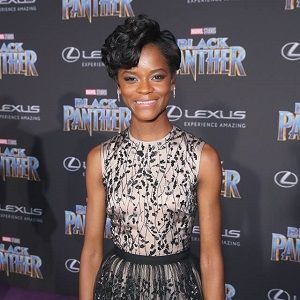 The 24-year-old Guyanese-British actress, Letitia is an unmarried woman. As of now, she has not been in any relationship to date. Furthermore, she has never been involved in any affairs.

She has just started her career and never seen with any boys in the public and media. Talking about her past relationship, there is not any information regarding her affairs.

Currently, Letitia is enjoying her single life and totally focus on her career.

Who is Letitia Wright?

Letitia Wright is a British actress born in Guyana. She is famous for playing the role of Shuri in Marvel Cinematic Universe’s Black Panther.

Furthermore, she has also played in a couple of hit British TV series which include Coming Up, Chasing Shadows, Balck Mirror, and few more.

In addition, she also got the nomination for the British Independent Film Award in the category of Most Promising Newcomer for her role in Urban Hymn.

Letitia was born on October 31, 1993, in Georgetown, Guyana. Moving towards her nationality, she is Guyanese-British and her ethnicity is Afro-Guyanese. She grew up in London along with her parents.

From the beginning of her childhood, she had a keen interest in acting and also began to learn acting. Talking about her education, she attended high school in London.

Letitia began her acting career from the 2011 television series Holby City followed by Random and Top Boy. Furthermore, she also appeared in a couple of hit British TV series which include Coming Up, Chasing Shadows, Balck Mirror, and few more.

Recently, this talented actress also starred in Humans in 2016 and Black Mirror in 2017. Besides TV series, she has also acted in several popular movies.

She is famous for playing the role of Shuri in Marvel Cinematic Universe’s Black Panther. Moreover, she rose to fame after appearing as Jamie Harrison in Urban Hymn for which she also got a nomination for British Independent Film Award.

In Black Panther, she delivered the role of the princess of Wakanda on which she shared the screen along with Michael B. Jordan, Lupita Nyong’o, Danai Gurira, and Chadwick Boseman. One of her most awaited movie, Avengers: Infinity War is coming in 2018.

Being a popular actress, she earns a handsome amount of money from her profession. However, her salary and net worth are unknown.

As of now, she has not won any awards. Although, she got the nomination for the British Independent Film Award in the category of Most Promising Newcomer for her role in Urban Hymn.

GO girl! Marvel’s Black Panther actress, Letitia Wright went through depression and quit acting for two years. How did she come out of it? Her story inspires many people