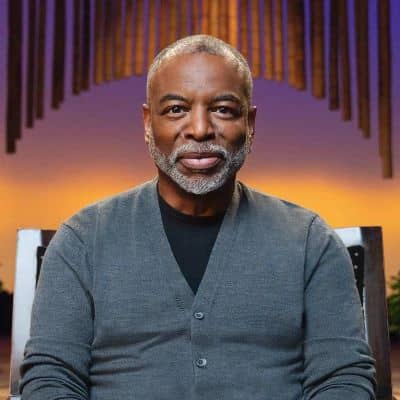 Who is LeVar Burton wife?

LeVar Burton is married to a professional make-up artist, Stephanie Cozart on October 3, 1992.

Who is LeVar Burton?

LeVar Burton is an American actor, television host, director, and author who is renowned as Kunta Kinte in the ABC miniseries Roots (1977). Further, people know him as Lt. Commander Geordi La Forge in Star Trek: The Next Generation (1987–1994).

Burton was a host of the PBS Kids educational television series Reading Rainbow for more than 23 years (1983–2006) and won 12 Daytime Emmy Awards, and a Peabody Award. In addition, he is the board member of the Directors Guild of America.

He was born on February 16, 1957, with the birthname Levardis Robert Martyn Burton Jr. in Landstuhl, West Germany. The 70-year-old actor has All-American ethnicity and German ethnicity.

Introducing his parents, his mother Erma Gene (née Christian) was a social worker, administrator, and educator. His father was a photographer for the U.S. Army Signal Corps stationed at Landstuhl and remains masked. Burton has two sisters with whom he grew up in Sacramento, California under the nurturing of his mother.

Burton is Roman Catholic who first attended St. Pius X Minor Seminary in Galt, California with the intention to become a priest. He is a graduate of the University of Southern California.

Things do change, right? Eventually, Burton lost interest in becoming a priest and started acting at 19, and thus starred in the 1977 television miniseries Roots.

He then featured as Cap Jackson in Looking for Mr. Goodbar (1977), and Donald Lang in Dummy (1979). Next, he won an NAACP Image Award for Outstanding Actor in a Motion Picture as Tommy Price in The Hunter (1980).

In 1990, Burton was inducted into the Hollywood Walk of Fame. Later, in 2022 he was the Grand Marshal of the 2022 Rose Parade in Pasadena, California, and presided over the afternoon Rose Bowl Game.

Burton started his directing career through various Star Trek series in the mid-1990s. Further, he has directed episodes of Charmed, JAG, Las Vegas, and Soul Food: The Series.

Burton was the co-director for the 2016 multi-perspective docuseries Two-Front War. It is based on the fight for civil rights in America and the struggle for equality of Black soldiers in Vietnam.

Burton is all set to host the Trivial Pursuit Game Show in Development at one according to news on November 21, 2021. Similarly, he is a board member for the AIDS Research Alliance, a non-profit, medical research organization since 2012.

The estimated net worth of actor LeVar Burton is $6 million. He mustered a handsome salary from his successful acting and directing career.

Burton has successfully kept himself out of rumors and controversies as he does not mix his personal and professional lives.

Burton stands 5 feet and 7 inches tall with grey hair, brown eyes, and a brown skin complexion. On top of this his weight, chest-waist-hip size, bicep, dress, and shoe size are under update.