He got married at the age of 26 for ten months.

His name is joined with Kathleen Madugan. They sound like an old married couple because they have known each other for 27 years. However, they are not in that kind of romantic relationship. He has not shared his relationship status with anyone and always liked to keep his private life secret from the media. 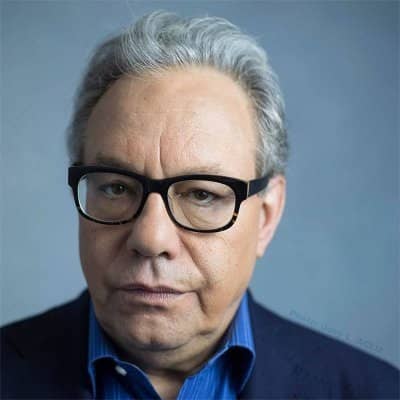 Who is Lewis Black?

Lewis Black is one of the popular stand–up comedians, author, playwright, social critic, and actor who is known for his angry and aggressive comedic style.

He is known for hosting Comedy Central series Lewis Black’s Root of All Evil and also The Daily Show.

He is a spokesman for the Aruba Tourism Authority who has appeared in Television ads that first aired in late 2009 and 2010.

His parents Jeannette Black who is a teacher and Samuel Black who is an artist and mechanical engineer gave him the name Lewis Niles Black. He grew up in a middle-class Jewish family inside Silver Spring, Maryland.

Black also learned Playwriting and was a brother of Pi Lambda Phi International fraternity as well as also a member of the Student Congress. He graduated in 1970 moved back to Washington and served at the Appalachian Regional Commission, he has also written plays and also did standup comedy in DuPont Circle.

He got his MFA degree at the Yale School of Drama in 1977.

Lewis began his theatrical career as a playwright. In addition, he served as a playwright in residence and an assistant creative director for Steve Olsen‘s West Bank Café Downstairs Theatre Bar in Hell’s Kitchen, New York.

Between 1981 and 1989, he worked on hundreds of one-act plays alongside Rusty Magee, a lyricist, and composer, and Rand Foerster, a director.

He co-wrote the song “The Czar of Rock and Roll” with Rusty Magee, which was launched in Houston’s Alley Theatre in 1990. He also performed stand-up comedy as an opening act for the plays.

After the management changed, he became more of a comedian and began acting in films and television programs. Hannah and Her Sisters, Jacob’s Ladder, The Hard Way, American Dummy, Accepted, Man of the Year, Rock Dog, The Last Laugh, Mad About You, The Bark Show, Duck Dodgers, the Happy Elf, The Big Bang Theory, and many others are among his shows and films.

His comic method is that of a person dealing with the irrationalities of life as well as politics, as well as the coming collapse of his boundaries of stability.

Some of Black’s awards are as follows:

Black is one of the celebrities whose net worth is $2 million. He has not shared his annual salary and income of his. He is living a comfortable life and his primary source comes from his career.

Black has not been in any kinds of negative controversy and rumors as he keeps his personal life confidential.

Lewis is 5 feet 11 inches tall and weighs 75kg. there is no information available about his hips and waist sizes however his body sizes like chest size are 46 inches.

His dress and shoes sizes are yet to be revealed. He has a fair skin tone with white hair, black eyes, and also wears glasses.

Black is active on social media with lots of fan following. He has social networking sites like Twitter with 368.9k followers with almost 4967 tweets.

Likewise, on Instagram, he has 92.6k followers and shared many photos of himself playing golf and his collection of candy status of him.

He has a Facebook account named under @Lewis Black with 867k fans and has a TikTok account where he has got 323.5k followers with 1.8M likes. He also has a YouTube channel with 112k subscribers.

Stokley speaks about the reaction of the Mint Condition about Keri Lewis tying knot with Toni Braxton!