Lewis Hamilton is an F1 world champ. Lewis's romantic life is pretty colorful. He is dating a Russian model at present. 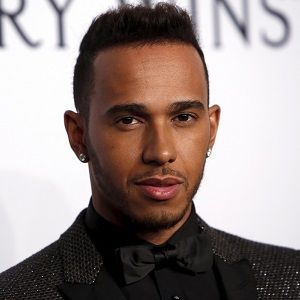 The way I drive, the way I handle a car, is an expression of my inner feelings.

I don't believe I have a playboy life.

On my back, I have the cross and angel wings: rise above it, no matter what life throws at you. And also, you know, Jesus rose from the grave.

Lewis Hamilton is presently dating a Russian model Viktoria Odintcova. His now girlfriend revealed that initially, he was the one who approached her. They started with courtship and later their relation turned platonic.

Who is Lewis Hamilton?

Lewis Hamilton is a motor racing driver, who won the world championship. He is a great role model for many of those young black people. Hamilton is the first and only black driver to race in Formula One.

He is known for being 2008, 2014, and 2015 Formula One World Champion. Hamilton is signed with Mercedes AMG Petronas F1. Likewise, he also has remarkable performance as an actor. In the movie Zoolander 2.

Lewis is of British nationality. He was born on January 7, 1985, in Stevenage, United Kingdom.

Later, in his early teens, he went on to live with his father and step-brother. His brother,  Nicolas was a professional racer. He also has Nicola Lockhart his half Sister and Samantha Lockhart another half-sister in his family.

Lewis’s fascination with cars started at an early age while he was 6 years old when he got a remote control car as a gift from his father. He gets so fascinated with it and uses it to perform different extraordinarily in the local competitions.

Lewis went to The John Henry Newman School in his hometown Stevenage. In 2001, a British star joins the Cambridge Arts & Science College for his further study.

But he stays until 2002 and decides to quit his schooling to continue his racing career.

Lewis Hamilton starts his career working with British Formula Renault Winter Series in 2001. His start was not so good but in the end, he manages to prove it magnificent. He has good performance help him to secure a place in the 2002 Formula Renault UK Campaign. Presenting in Racing for Manor Motorsport, he was one of the most talented youngsters in the game.

The racer has exceptional performance in Formula Three. It helps his race to take part in the ART Grand Prix in 2006. Lewis in his first attempt was able to score the victory at the GP2 Championship racing against the likes of Timo Glock and Nelson Piquet.

In 2007, he was able to set numerous records in his first season of Formula One Hamilton. He also finished the second season in the 2007 Formula One Championship one point behind Kimi Räikkönen. Hamilton is known for being 2008, 2014, and 2015 Formula One World Champion.

He finished in the top 5 and won his 1st Grand Prix in Canada. 2008 is his grand opening for his career as he was launch in F1 racing. He 2012, he won the Grand Prix of Canada for the 3rdtime, and also came first in the Grand Prix of Hungary. At the beginning of 2008, Hamilton signed a contract with McLaren-Mercedes to stay with them until the end of 2012.

In 2014, he played against China and got his victory. The same year, he finished his very first career hat trick of winning three races consecutively. They also receive victory in Spain made it four in a row. Mercedes was at that time the dominant team in the Formula One arena and Hamilton was one of their biggest assets. Hamilton has a good starting and next year was also lucky for him.

The 2015 season also starts winning the Australian Grand Prix. As Mercedes has the continuously remarkable performance they signed him on for the next 3 years until the end of 2018. He had made a different achievement from Mercedes. Hamilton is signed with Mercedes AMG Petronas F1.

In 2013, he signed a 3-year contract with the Mercedes Benz and became the first British driver to win in Mercedes after 1955 by Stirling Moss. In the 2010 season, Lewis achieves his victory when he raced down to the top spot in the Turkish Grand Prix. He performs average in the Australian and Chinese Grand Prix.

In Japan, South Korea, and Brazil Grand Prix, Lewis finished at fifth, second, and fourth spots respectively. He also has a remarkable performance as an actor. In the movie Zoolander 2, he acted in “Old and Lame” in 2016.  Hamilton has also provided his voice for his role as Lewis Hamilton in the animated action-comedy spy movie Cars 2 in 2011. Moreover, as an actor, Lewis has done a voice-over for the character of Lewis in three episodes of the comedy series Tooned in 2012.

Hamilton has a remarkable performance in the game and has also won different awards. In 2014, he gets the BBC Sports Personality of the Year Award.

Likewise, he receives Laureus World Sports Award for Breakthrough of the Year in 2008. The racer was also awarded the Best Driver ESPY Award in 2017. Hamilton receives the Special prize of the jury in 2008.

He is one of the professional racers and has very good earning. His annual salary meanwhile, is currently thought to be around $50 million – £38 million a year. His net worth is $285 million.

And from his behavior, receiving tension, he has problems with other drivers. He also involves various criticism by some MPs that he is not regularly paying UK taxes by living out of the country.

Being a Racer Lewis Hamilton has athletics built a healthy body. He stands at a height of 5 feet 9 inches(174 cm). Hamilton weighs 69 kg or 152 lbs.