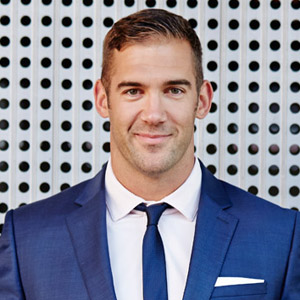 In reality, failure is simply feedback. It’s not that you are bad or not good enough or incapable. Failure (or feedback) gives you the opportunity to look at what’s not working and figure out how to make it work

John Wooden quote: “You show me your friends, and I’ll show you your future.

Lewis Howes never shared his relationship with the public. He has always kept his mouth zipped whenever he was asked questions about his relationship. Lewis may have a girlfriend, he may be dating someone but he didn’t share it.

Maybe he is single and planning for marriage. Lewis didn’t say anything about his personal life in media or in his podcasts. All the fans of Lewis are waiting for his relationship status.

Who is Lewis Howes?

Lewis Howes is an American author, entrepreneur, and former professional Arena League football player. He hosts the podcast talk show The School of Greatness. He set the NCAA record for most receiving yards in a single game, catching for 418 yards.

Lewis Howes was born on 16 March 1983 in Delaware, Ohio. His nationality is American and ethnicity is unavailable.

His father was in an insurance business but mother’s information is unknown. Lewis’s older brother is a jazz musician and teacher Christian Howes. One of his brothers was sent to jail for selling drugs and her sister was into alcoholism.

Lewis didn’t want to study. Although he was placed in a special class, the school was a torture for him. He has attended Principia College as well as Capital University.

Lewis is the former NCAA record holder for the most receiving yards in a single game in 2002 against Martin Luther College. He collided with a wall and broke his wrist while playing his first Arena League. Although he played the rest of the season with the broken wrist.

Later he had to undergo surgery and have to end his career in football. He currently plays handball for USA Men’s National team after quitting from New York Team Handball Club. Apart from football Lewis is a businessman too. He founded a consulting firm for the sports industry named SportsNetworker. He has many multimillion-dollar online businesses.

Apart from this Lewis is also a co-writer of the book LinkedWorking: Generating Success which is a guide for the business-oriented social networking site. Lewis is also an author of The Ultimate Webinar Marketing Guide.

This former football player from his career has earned a net worth of around $10 million.

Giving his best performance as a footballer and businessman Lewis has never been in any controversies nor in any rumors. He is a successful business keeping all the rumors and controversies apart.

Lewis Howes has a height of 6 feet 4 inches and weighs 99.8 kgs. His hair color is brown and eye color is dark brown. His shoe size is unknown.