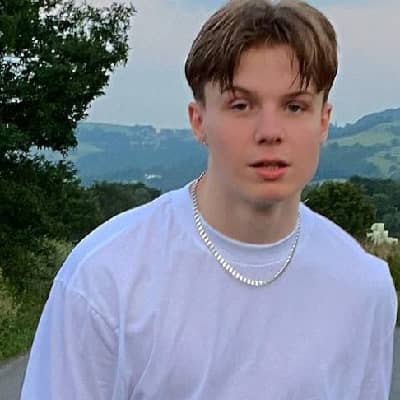 Currently, Lewis Sharp is single and not in a relationship with anyone.

He is more focused on his career and also he likes to be around his friend and entertain his fans in various ways.

Who is Lewis Sharp?

He rose to fame for his lip-sync and, dance video on Tiktok collaborates alongside his twin brother James on the account TheSharpTwins.

Lewis was born on February 9, 2001. The birthplace of Lewis is in England. He is of British citizenship and is of caucasian ethnicity.

The identity of their parents including his father, mother is unknown. However, he has a twin brother named James Sharp. He is also a Tiktok star.

Talking about his academic journey, he hasn’t shared any details regarding school or college so, he might be attending high school with his twin brother.

Lewis is extremely popular on Tiktok where he collaborates with his twin brother. He has over 3.9m followers with id @thesharptwins and gained more than 109m likes.

On November 17, 2018, he uploads his first videos which gained over 34.2k likes with 338 comments. One of the most-watched videos on his collaborative Tiktok account is captioned as “Did you guys notice anything change with James” features in the Justin Timberlake song, Rock Your Body.

Besides Tiktok, he has also a youtube channel along with twin brother where the brother makes challenges videos, vlog, Q&A videos, and so on. He is also a skilled dancer who competed in a breakdancing competition called Battel of the year in 2017.

Furthermore, he appeared in the movie titled Jamie which is his upcoming first movie released on February 26, 2021.

Besides that, he has managed to maintain his profile as a Tiktok star.

The Tiktok star hasn’t yet shared his net worth and salary in public. However, he has a youtube channel together with his twin brother, James.

Analyzing their latest subscriber’s and viewer’s rate, the sharp brother earns an average of $13 to $215 monthly. Likely, his yearly estimate is $161 to $2.6k.

The Tiktok star stands at the height of 5 feet 6 inches tall and his weight is around 57 kg. He has blond hair and has blue color pair of eyes. He wears 7 (US) shoe size.

Apart from that, there is no information available regarding his other body measurement.

Lewis is active on a verified Tiktok account with the handle @thesharptwins and has a youtube channel along with a twin brother.

The Tiktok star is active on Instagram where he has over 284k followers. On the platform, he is following the personalities like Jason Paul, Joe Rogan, Anthony Joshua.

He has also another Instagram account handle @thesharptwins together with his twin brother where they have more than 175k followers.

Winnie Harlow-the first model with skin condition-vitiligo-to walk the ramp for famous brands! Know about her childhood and confidence!