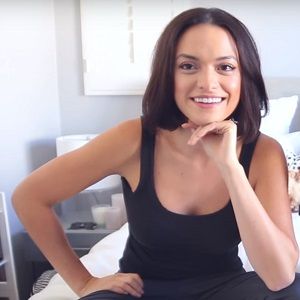 The 28-year-old American designer, Lex Lee is an unmarried woman. However, she has been dating his longtime boyfriend Hunter March for almost five years. They began hanging out in 2013 and still continuing their relationship.

Furthermore, she has been also sharing photos and videos with him on her Instagram as well as on YouTube. Besides him, she has never been seen with any other man to date. Currently, Lex and Hunter are enjoying their love life and living elegantly.

Who is Lex Lee?

Lex Lee is an American furniture designer as well as a YouTuber. She is the girlfriend of famous YouTuber and TV host Hunter March. Furthermore, she won the institute’s “Chairing Styles” competition in 2013. Currently, she also runs a YouTube channel on which she has earned over 16k subscribers.

Lex was born on September 9, 1989, in Los Angeles, California, United States of America. Talking about her nationality, she is American and her ethnicity is unknown.

There is not any information regarding her childhood and family background. She grew up in the San Fernando Valley in California along with her parents and older brother Jourdan.

Concerning in her education, she completed her graduation from the University of California in Economics as major and urban & regional studies as a minor. Later, she joined Fashion Institute of Design & Merchandising and learned Interior Designing.

Lex began her career as an interior designer. She is the girlfriend of famous YouTuber and TV host Hunter March. Furthermore, she won the institute’s “Chairing Styles” competition in 2013.

Currently, she also runs a YouTube channel on which she has earned over 16k subscribers. Oon her YouTube channel, she posts about her life, modern design, and her furniture.

As she earned a degree in Interior Designing, she also owned first place in the Institute’s Chairing Styles competition for furniture design.

She has been also working as a designer and production manager at Lloyd’s Custom Furniture here in Los Angeles.

After working their, she developed her own skill at furniture designing and started making various furniture. Additionally, Lex has also appeared in her boyfriend’s YouTube videos.

Being a famois furniture designer, she pockets a decent amount of money from her profession. However, her salary and net worth are unknown.

As she has full focus on her career, she has never been involved in any controversial stuff.

Moving towards her body measurements, she has a pair of gorgeous brown eyes and dark brown hair.

Additionally, she also runs a YouTube channel on which she has earned over 16k subscribers.