Lexa Doig was in a romantic relationship with actor Michael Shanks after they met on the sets of ‘Andromeda’. They tied the knot on August 2, 2003, and welcomed a son and a daughter. The couple played together in several series and movies like ‘Stargate SG-1’, ‘tactical Force’, etc. 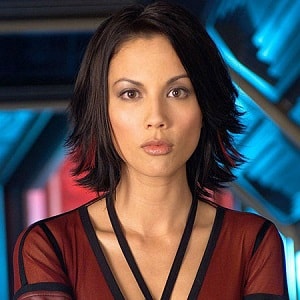 “Being stuck in airports, you always end up buying perfume and sunglasses.”

My relationships with my loved ones always take precedence over work.

Thongs don't show. With jeans, you're always going to get panty lines and I think that's just a big mistake.

Who is Lexa Doig?

Lexa Doig is a Canadian actress and she is famous for her title role in the 2000-2005 Canadian-American science fiction-adventure television series ‘Andromenda’ and for her role as Rowan in the science fiction action horror movie ‘Jason’.

She was born in Toronto, Ontario, Canada on June 8, 1973. Her birth name is Alexandra Lecciones Doig and she is currently 48 years old. Her father’s name is Davis W. Doig and her mother’s name is Gloria B. Lecciones. She is the youngest child and her older brother’s name is Ted Doig.

Her father is a Canadian engineer of Scottish and Irish ancestry who was a petroleum executive officer in and her mother is a registered nurse who originally came from Dumaguete City, Philippines, and Toronto. She holds Canadian citizenship and her ethnicity is a mix of English, Scottish, Irish, and Filipino. She was inspired to be an actress at the age of 9 after she watched ‘Porgy and Bess’.

She studied rhythmic gymnastics as a child and studied American Sign language as a teenager. She completed her compulsory secondary education at Don Mills Collegiate Institute.

She enrolled in a vocational modeling program after her school and she was immediately offered representation by a talent agent and booked in various modeling projects at the age of 16. She dropped out of her final year in high school to pursue an acting career.

She co-hosted the Canadian game show ‘Video & Arcade Top 10’ from 1991 to 2006. Later, she worked on theatre productions of ‘Romeo and Juliet’ and ‘Arsenic and Old Lace’.

Lexa debuted her first television role as Second Girl on ‘The Hidden Room’ in 199. She made her first recurring role in the TV series ‘TekWar’ in 1994 and portrayed the role of Cowgirl.

Lexa portrayed the female lead role of Dr. Rowan LaFontaine in the horror film ‘Jason X’ in 2002 an as a recurring role as Dr. Ccarolyn Lam in ‘Stargate SG-1’ from 2005 to 2007. She appeared as the alien physician Dr. Leah Pearlman in six episodes in the remake of ‘V’ in 2010 and played the role of Liber8 terrorist Sonya Valentine in the Canadian science fiction TV series ‘Continuum’ in 2012.

She appeared in a recurring role as Talia al Ghu; in the fifth season of ‘Arrow’ in 2017 and played DeAnn Anderson in ‘The Arrangement’.

Lexa along with her husband are actively involved as charity fundraising partners for the multiple sclerosis Society of Canada.

She won Leo Award for Best Supporting Performance by a Female in a Dramatic Series for ‘Continuum’ in 2014, nominated for the same title in 2013, and for ‘Played’ in 2014.

There was a rumor about her demise and people started writing their message of condolence. But, it is officially proved that she is still alive.