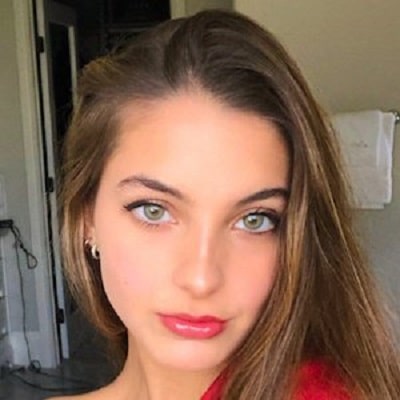 Lexi Rivera is currently in a relationship. She is dating a professional skateboarder Ben Azelart since early 2018 and they officially opened up about their relationship in November 2018.

They often posts pictures of together on Instagram to their fans. They met for the first time through Lexi’s brother Brent Rivera. Hope, they will soon tie their knot.

Who is Lexi Rivera?

Lexi Rivera is an American social media star who is recognized for famous her collaboration with her Internet celebrity brother, Brent Rivera.

She was born on 7th June 2001, in Huntington Beach, California, in the United States of America. Her birth sign is Gemini. She was born to  John Rivera (father) and Laura Rivera (mother). She has three older brothers namely Brent, Brice and Blake Rivera.

Lexi holds American citizenship but her ethnicity is unknown.

She attended Huntington High School, in Huntington, West Virginia and graduated in June 2019.

She has been active on various social media platforms since an early age but her popularity has largely been attributed to her brother, Brent’s online success. Before that, she was only famous in her school and neighborhood.

Lexi posted her first picture to Instagram on 26th May 2012 which was approximately three years after her brother’s first YouTube video. After that, her online popularity has been gradually growing, particularly on Instagram and YouTube platforms. Most of the posts Lexi uploads showcase her spending quality time with her siblings, -confirming the close bond the siblings share.

Moreover, she runs her personal YouTube channel called Alexa Rivera where she shares with her fans Q&A session videos, challenges, and personal Vlogs among others.

Talking about her brother, he began his career at the age of 11 and it has always been his dream to entertain. He created his YouTube channel in 2009 as MrBrent98 and his Vine channel in the year 2013.

He went on uploading some of the famous videos which helped him earn immensely popular on YouTube. Brent released a song on iTunes titled, Doubt Your Doubts on November 14.

She has an estimated net worth of around $300k and she has earned that sum of money from her professional career. She lives her lavish life with her family and friends.

There was a rumor regarding the relationship between Lexi and Ben Azelart. The rumor ended after both of them confirmed their relationship.