Actress Lia Marie Johnson is having an affair with a musician. 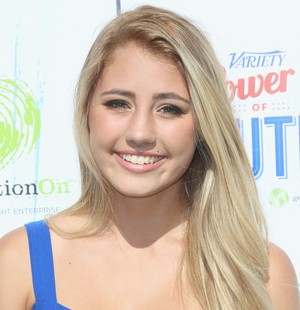 Lia Marie Johnson is dating Ryan Bowers. Her boyfriend Ryan is a music artist. The couple is very open about their relationship and keeps posting their photos on their social media handle, Instagram.

Previously, she has been seen in compromising positions with actor JC Caylen and musician Dillon Rupp. It was rumored that she is going steady with JC Caylen but of late her closeness to Dillon Rupp has also caught the eyes of the media.

Lia Marie Johnson is definitely in a relationship but it is difficult to predict who of the two male celebrities she is more close to.

Who is Lia Marie Johnson?

Lia Marie Johnson is an American actress, songwriter, singer, and internet celebrity. She has her own YouTube channel which hit more than 117 million views.

She gained popularity for her repeated appearances on Fine Brothers ‘Kids React’ series. Her name features in the Top 10 young stars on YouTube. Her role in ‘Terry The Tomboy’ is highly appreciated.

Lia Marie Johnson was born on 23 November 1996, in Wahiawa, Hawaii, United States. She is 24 years old. Her nationality is American and her ethnicity is Caucasian. She is the eldest of six siblings.

Lia was born to a military family. Her father was with the US Navy. She lived in Florida, Port Hueneme, and Virginia Beach, and later in California.

Lia Marie Johnson has a Navy background. Her father was habituated to alcohol. Her family is closely knit. She has four younger sisters and one younger brother.

Her mother has greatly assisted in boosting her daughter’s career by uploading the various performances of her daughter on her YouTube account.

Lia also loves and is close to her younger siblings and tweets about their academic accomplishments. She also is very happy whenever her younger sisters bag roles in movies.

During her school days, she did a lot of church recitals and participated in a number of talent shows.

Lia Marie Johnson had an inclination towards the entertainment industry from a very young age. At the end of 2007, her YouTube account was created. Initially, Lia Marie Johnson’s mother used to post her church recitals and talent show acts on this channel.

In a couple of years, Lia started uploading her musical performances, brief comedy skits, and personal commentaries on her channel. Her work with Fine Brothers in 2010 on the Kids React series brought her fame.

She migrated to Teen React and later to YouTubers React. She acquired roles in movies and also appeared in award shows.

Besides, she plays the guitar well and also is able to do good dancing. Over the last 2 years, she has been concentrating on recording and releasing her two musical singles.

This young actress has collected a net worth of around $2 million.

She was seen as an actor and internet personality, JC Caylen in Disneyland in 2015. They were seen getting close, walking hand-in-hand, and posing together for the shutters.

In 2016, she was also sighted with Dillon Rupp (musician and womanizer) in intimate positions and in a heavily drunk state. Dillon Rupp’s Snapchat was full of Lia’s pictures, though there were other friends with them during this car ride.

Lia was once shamed by a woman stranger on the street for her shorts which the street lady felt were too short. Her music video ‘DNA’ is a reflection of her own life and her mother’s and her domestic violence encounters.

Lia Marie Johnson has interviewed President Barack Obama in 2016. She is a fine actress and has won many accolades for her good work.

Lia Marie Johnson Surrounded Herself In A Controversy After Her Disturbing Live Stream abusing F*** off to her followers!