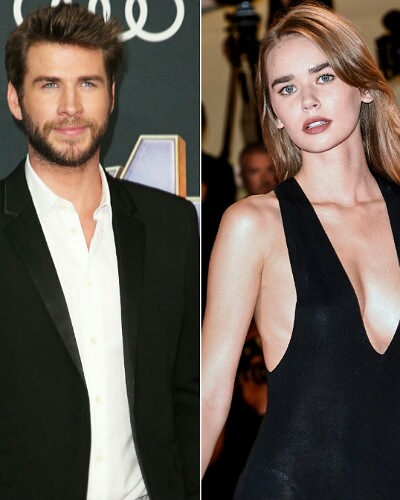 Liam Hemsworth had started seeing Australian model Gabriella Brooks. It appeared to be a casual start but People magazine has reported that the relationship has taken a serious turn. Liam is spending a lot of time with Gabriella and now they have a beach PDA as well.

Yes! Liam Hemsworth, 30 is in love again. He is seeing Australian model Gabriella Brooks, 21 and the two are in a relationship. A source told People:

“Liam and Gabriella have spent a lot of time in Australia together. Gabriella has met Liam’s siblings and his parents.”

The paparazzi had managed to get hold of some pics of Gabriella meeting Liam’s parents last December before Christmas. These pics sparked the first rumors of their relationship.

Liam never confirmed about the ongoing rumors. But he neither tried to hide his relationship with Gabriella. Recently, he was seen kissing his new lady love on an Australian beach in Byron Bay. They had a PDA-packed session which was proof enough of their budding romance. They hugged each other, lounged in the sand and went swimming in the sea.

Liam and Gabriella like similar things. They are both into exercising, surfing, and relaxing at the beach. Besides, Liam’s friends also get along well with her.

Liam is now happy and in a great mood, an insider said. He deserved it after his breakup with Miley Cyrus.

Liam Hemsworth and his previous relationships

Liam was previously in a relationship with bisexual singer Miley Cyrus. The couple had an on-off relationship for ten years. They were also married but split in less than a year of marriage in August 2019.  It was a bad time for Liam who then returned to Australia to be with his brother Chris Hemsworth and his family. The couple’s divorce was settled in December 2019.

Later, in October 2019, he was close to Dynasty star Maddison Brown and rumors of their relationship started floating. Maddison is also an Australian national in her early 20s. An insider revealed to US Weekly:

“Liam and Maddison weren’t that serious and were mainly having fun together.”

The singer Miley is now dating Cody Simpson who is an Australian singer. Her marriage to Liam was probably on open-type of marriage.

Gabriella Brooks and her past relationships

Model Gabriella was dating The 1975 frontman Matt Healy. She and Matt dated for four years but split in summer 2019. Talking of this split, a source had told The Sun:

“There has been a lot of strain on their relationship, not helped by him being on tour a lot this year. He parties a lot at home when he’s there and Gabby had just had enough. She doesn’t want to lead her life like that.”

Gabriella has worked for famous brands Calvin Klein and Topshop. She is a graduate of Sydney University and holds a degree in History and Archeology. She had appeared in an indie movie calked Remarkable.

Young Gabriella is an Instagram star and 189k followers follow her on it. The posts contain her stylish modelling shots and also cute pics of her with animals.

Liam Hemsworth is one of the attractive looking actors in the Australian industry. He is known for his roles in some series like Neighbours and The Elephant Princess.

He has also been a part of some American movies like The Last Song, The Hunger Games film series and Independence Day: Resurgence. More bio…