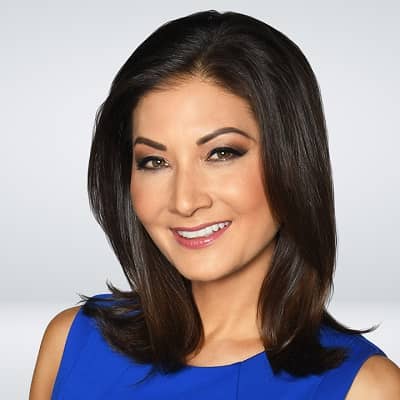 The renowned journalist is in a romantic relationship with fitness trainer Brett Hoebel. The couple is also a business partner. Similarly, she has shared a picture of love bugs on Instagram.

Previously, she was married to the American actor Brian Chase in 2012. The couple shared the vows at the Greystone Mansion’s garden. This love bird spent their honeymoon in Paris. However, they got separated after a few years of marriage. But she hasn’t revealed information related to the divorce.

Who is Liberte Chan?

Liberte Chan is an American Meteorologist, Journalist, and news anchor in Los Angeles. Further, she is popular for working as a weekday morning news anchor at NBC affiliate, KMIR-TV. Moreover, she was nominated for the LABJ Events KTLA 5 Morning News.

At present, she works as a weather forecast for the KTLA channel.

Liberte Chan was born to a Caucasian father and Chinese mother in Los Angeles, California on the 16th of July. She hasn’t revealed her birth date till now.

Through her parents, she holds American nationality and belongs to mixed ethnicity. Her father’s name is Tom Thornbury is an archeologist. Her mother’s name is Angie Thornbury.

She finished her high school education at the Marlborough School of Girls. Then, she graduated with a Bachelor of Arts in Journalism in 2001 from the University of Massachusetts in Amherst.

Later, she earned her Master’s Degree in MPH, Public Health, and Communication Track in 2005 from the University of Southern California. Likely, she received a costly certificate of meteorology from Mississippi State University in 2015.

After that, she joined KCOY-TV Network as a general assignment for two years. But, it is renamed with KKFX-TV after the Fox network took over ownership.

Altogether, she served as are reporter and morning anchor for two years at KMIR 6 News Channel.

Apart from that, she has revealed her other interest in fashion, traveling, and a healthy lifestyle via her blog. She also fosters fitness and yoga. Furthermore, this reporter has launched her clothing line named ‘Sweat with Soul’.

From a young age, she gains a decent amount of net worth from her career in media and reporting. Liberte has a net worth of around $3 Million.

In the year 2016,  Liberte had a small incident regarding wardrobe malfunction. She was disrupted by her colleague during a live forecast. Furthermore, she was interrupted in her line of work because she was wearing a white J.McLaughlin dress with a coral pattern. Her dress was unique and she was getting negative emails too. Fortunately, Chris Burrous, her co-worker saved his colleague from a green screen. Chris took off his suit jacket and helped her put it on to cover her arms.

But at the end of the video, she started dancing and she joked there and laughs a lot due to the huge jacket. The video went viral, and it turned out that was a joke.

Further, her height is 5 feet 5 inches and weighs around 50 Kg.