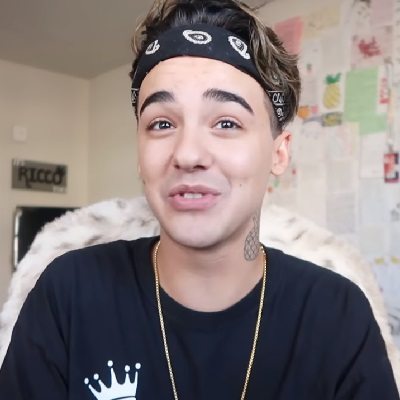 Lil Drip is current in a relationship with Hello Langie. His girlfriend is a YouTuber by profession.

The couple started dating back in 2019. They make YouTube videos for their YouTube channel. Most of them including pranks video that shows their comfort level with each other.

As of now, the couple is enjoying their perfect relationship full of love. Currently, he lives with Langie in Los Angeles.

Who is Lil Drip?

American Lil Drip is a social media star and Rapper. He is renowned for its contents on YouTube and TikTok that went viral on the web.

Last, in 2020, he released his latest EP, Lil Drip Last But Not Forever under the recording label, Mob Productions.

Lil Drip was born on the 24th of June 1996 in Sacramento, California. His birth name if Adym Alyxander Yorba. He is of British-Irish ethnicity.

Till the date, he has not revealed named his mother and father. However, once, her mother featured his YouTube video with title, Never Have I ever With My Mom.

He grew along with seven siblings. One of them is named Sawyer.

Details on his academics are behind the curtains.

There he used to put his lip-syncs video that gripped the attention of his viewers. Also, his dance steps and facial expression happens to be the center of the attraction of such videos. In the current date, he has around 1.9 million followers with over 6.5 million likes.

Soon, he expanded his career to YouTube and became in YouTuber. On the 9th of January 2012, he created his YouTube channel with the name, Its Ricco tho. The channel is popular for vlogs and various challenges and prank videos.

Some of his most viewed video includes Scare Prank on Girlfriend, Telling My Girlfriend She Doesn’t Turn Me On, and I Got Her Ring with over 250k views. As of now, he has 1.37m subscribers with over 56.8 million likes.

Besides being a social media star, he is also a talented singer too. On the 25th of October 2018, he released his debut album, Lil Drip Lost Soul Ave. with 10 tracks.

In 2020, he launched his dropped his latest album, Last But Not Forever with 5 tracks. For his music, he has a separate YouTube channel that has around 229k subscribers with over 4.8 million views.

Per a post on TikTok, his earnings range from $1.1k to $1.9k. Besides that, he also makes through his Instagram posts and merch too.

The social media star got into the huge controversy when his Instagram and Snapchat got hacked. The hacker was deleting all the posts from Instagram.

Also, the hacker posted some of the private pictures and videos of the Lil on Snapchat.

Lil Drip has black eyes with black hair. He stands at a height of 5 feet 10 inches and has a decent weight.

Also, the social media star is quite passionate about tattoos too. Such tattoo includes pineapple on his neck, 1996 on his fingers of his left hand, California in the left forearms, and many more.

One of his favorites is a music tattoo on his hand that represents his passion for music.

This media star is active on Instagram with over 222k followers. Also, he has a second Instagram for his Music which has over 147k followers.

You may also read the bio of Peter James Hollens, Javie Young-White, and Damaris Lopez.

YouTube Couple Langie And Lil Drip Lost Their Baby Due To Ectopic Pregnancy; Their Relationship From Being Bestfriend To Dating Each Other!