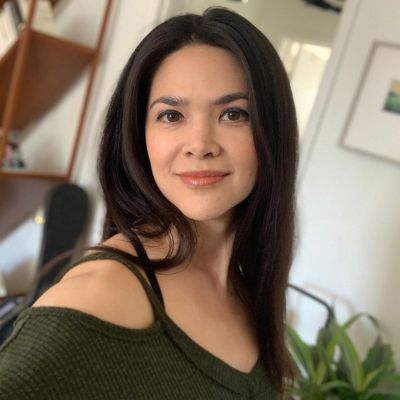 Lilan Bowden is mingled. She is currently in a relationship with fellow writer, Nick Mandernach.

The beautiful couple started dating in the year 2019. They often shared their beautiful pictures on their respective social media sites.

Who is Lilan Bowden?

Lilan Bowden is an actress, filmmaker, and comedian from the United States. She is popular for her role as Rebecca “Bex” Mack in Andi Mack.

Lilan was born in Castro Valley, California, the U.S. on September 1, 1985. Her full name is Alice Lilan Bowden.

She is the daughter of Ivor Bowden (father) and Shiou Chen (mother). Her father is American and her mother is from Taiwan. She has also a younger brother named Jason Bowden.

Bowden is of American nationality whereas she belongs to mixed (English, Welsh, and Taiwanese) ethnicity.

Talking about her educational qualification, she went to Castro Valley High School. During high school, she had joined an improv club and graduated in 2002.

She then attended the University of California, Irvine. After graduating, she moved to Los Angeles where she joined the Upright Citizens Brigade.

Lilan began her career as a comedian with the  “improv” and sketch comedy group ‘Upright Citizens Brigade.’ She has been featured in sketch comedy videos on Funny or Die and CollegeHumor.

Similarly, Bowden guest-starred on several shows such as Parks and Recreation, The Pete Holmes Show, and Suburgatory. In August 2008, Bowden made her first television appearance in an episode of the comedy show, Gullible Gil as Jane.

The following year, she got her first feature role as Risa Reagan in the drama movie, S*x, and the USA premiered at Deauville Film Festival on September 12, 2008.

She made her theatrical film debut in the zombie action-adventure horror film, Rise of the Zombies as Jun Nagase in 2012.

She also appeared in the web series, CollegeHumor Originals as Various. Aside from acting, she has served as a writer for a comedy film/television production company, Funny or Die.

Similarly, she has worked as a writer on a couple of projects such as Lilan and Wilder Get Up Early, Life After LOST: Ethan Adopts, and Normal Best Friends Say Bye. She also served as the director for the short comedy film, The Vomit Solution to Thirsty Men.

In her early days in the industry, Lilan faced several problems due to her mixed ethnicity. She stated in her many interviews that her Asian-American ethnicity prevented her from bagging good roles.

As of 2021, Lilan has accumulated an estimated net worth of $1.5 million from her successful acting career.

Her yearly income and other earning are still under review.

The actress has a well-maintained body physique. She has a fair complexion. Likewise, she stands at the height of 5 feet 7 inches tall and her weight is about 59 kg.

Lilan has a dark brown pair of eyes and as well dark brown hair color. She has a mole near her neckline.

Lilan has also a self-titled YouTube channel with over 2.56k subscribers.