She came into the spotlight as the host of the television show, Sábado Gigante on Univision.

Lili Estefan is a divorcee.

Previously, the blonde beauty tied the knot with Lorenzo Luaces in 1992. The couple got married after being in a relationship for several months. Together they have also welcomed two children named, Lina Teresa and Lorenzo Jr.

However, in September 2017, the couple decided to separate and headed for the divorce, in 2019, they separated legally. The reason for their separation was Lorenzo’s extra-marital affair with a model. Moreover, he uploaded a cozy picture with her on Ig. 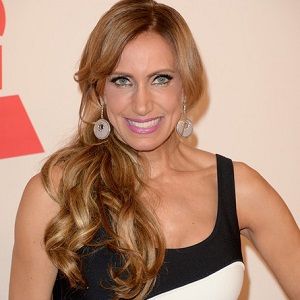 Who is Lili Estefan?

Lili was born on March 20, 1967, in Santiago de Cuba, Cuba. She is the niece of well-known music producer Emilio Estefan and singer Gloria Estefan.

Lili completed her education at the New World School of the Arts pilot dual college enrollment program with the Performing and Visual Arts Center in Miami, Florida.

Lili began her career as a  model at the Univision series Sábado Gigante. Later, she got huge recognition and became the host of the show. She came into the spotlight soon after she began to host Sábado Gigante.

Furthermore, her character has also been loved by many people. In 1998, she started to host another show called El Gordo y La Flaca. Currently, she is hosting the show which has been airing every weekday at 4 pm EST. Besides this, she was also the judge on Mira Quien Baila along with Horacio Villalobos and Bianca Marroquín.

Being a reputed television personality and model. Lili bags a massive amount of money from her profession. Currently, she has a net worth of $10 million. So far, she has not won any awards or honors.

However, he is doing her job in the best possible way and she has been loved and admired by many.

Once, there was a rumor that Lili had insured her legs for $1 million. Later, the news came true.

Lili has a height of 5 ft 9 inches. She has blue eyes and blonde hair.