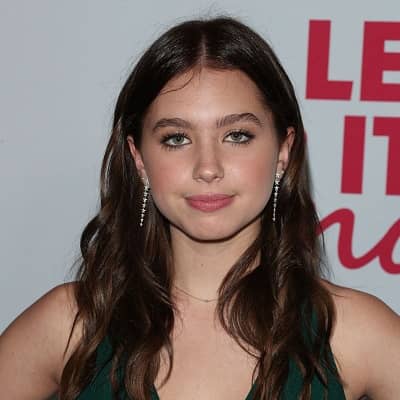 Lilia Buckingham is in a relationship with Jillian Shea Spaeder.

Before she was in a relationship with a child actor Jaeden Lieberher. On January 4, 2018, Lilia posted a picture of Jaden and wish him his birthday. After their dating rumors were spread.

Their relationship was confirmed when she posted a photo on Valentine’s Day with the caption “Got to love with this cute one.” But the couple broke up in mid-2018 due to some unrevealed problems.

Who is Lilia Buckingham?

Lilia Buckingham is one of the well-known names on the internet. She is also an American dancer. Besides dancing, she has also made her appearance on several TV shows and movies.

The star has also built her career as an author, and producer.

Lilla was born on April 09, 2003, in Los Angeles, California, the United States. Her ancestry is of British origin.

Her father’s name is Marcus Buckingham, who is a British author, motivational speaker, and business consultant.

Likely,  her mother’s name is Jane Buckingham. Lilia’s mother is an author and founder of Trendera. Her mother has also written a piece about Lilia for the Huffington Post titled Four Seconds of Fame in the year 2013. Her parents divorced in 2017.

She has an older brother Jack Buckingham. Growing up, she was interested in playing various sports like ice skating, horseback riding, and soccer.

Lilia attended the Harvard-Westlake School in Los Angeles, California. Moreover, she also has dance training with the MNR Dance Factory located in California.

Lilia’s mother came into the limelight from Lifetime‘s popular dance reality show Dance Moms in mid-2010. There she introduced her daughter, Lilia and she gets attention through it. Actually, Lilia loved dancing from an early age and all used to take part in competitions with MNR Dance Factory. Furthermore, she has won the Regional Junior Rainbow Rising Starz DOY 2013 and the Regional Junior Miss Thunderstruck Dance Icon in 2015.

The dancer made her first TV show appearance on the comedy series Modern Family in the Open House of Horrors episode in 2012. Likely, in 2016 she appeared in a music video Day & Night with friends Johnny Orlando and Mackenzie Ziegler. Besides dancing, she has appeared in many shows such as Modern Family (2012), Good morning America (2013), and Day & Night (2016), Crown Lake, Total Eclipse (2018), and also in Dirt (2018).

Lilia co-founded Positively Social with her brother and friends in 2017. The organization is built ad to encourage social media awareness and responsible online behavior. Furthermore, Lilia is also a model, she has worked for some famous brands like Dancer Keeper, Max & Bean, Malibu Sugar, and ModAngel. In November 2018, Buckingham and Emily Skinner released a single, “Denim Jacket” and donated a portion of the proceeds to GLAAD.

She also produced a music video for Jillian Shea Spaeder’s 2019 single “Something Better”, which received accolades at a number of film festivals. Buckingham and Shepard have also together co-authored a young adult novel, Influence.

She first joined YouTube on March 14, 2013, with the self-titled channel. In the starting days, she rarely uploaded videos on her channel, however, she later started to upload videos in a frequent manner and she also started gaining several subscribers. As of Dec 2020, she has about 57k subscribers with a total view of 130,717 views.

The star has amassed a net worth of around $3 million.

The average annual salary of a dancer is around $34,431. And so she also must get a salary in the similar range. Further, she also earns from her acting.

Following the Florida School shooting on February 14, 2018, Lilia expressed her outrage through her Twitter. She urged for stringent laws on gun control. Also, she invited her followers to join the national march – March for Our Lives on March 24, 2018.

The star has a beautiful face with hazel colored eyes. Similarly, she has dark brown colored hair and usually prefers to dye it into blonde.

Likely, her official TikTok account also holds 254.5K followers with more than 8M likes. Similarly, she has her own YouTube channel with 57K subscribers.

Morning shows the day! Meika Woollard began modeling since her earlylife at the age three. Now stepping into Acting as well!