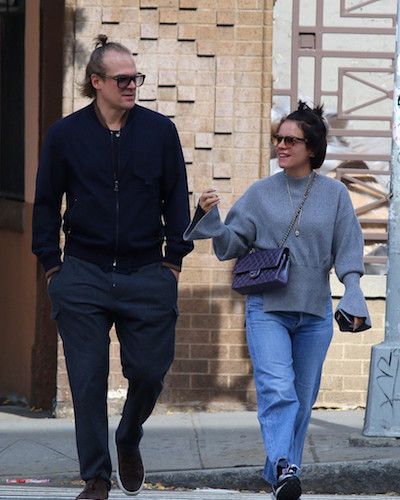 After months of speculating and rumors flying about the relationship between Lily Allen and the stranger things star David Harbour, we have finally been answered. It is officially confirmed that a 34-year-old English singer and 44-year actor are in a romantic relationship.

Lily Allen and David Harbour know what the fans want when it comes to celebrity romance. Romance is sparkling, and the couple proves it with their public display of affection.

The stranger things actor and the Smile singer were spotted sharing a kiss while out and about in New York City on Sunday morning. The couple was all about being cozy as they took a stroll through Manhattan’s downtown area.

Apparently, Lily Allen flew out to NYC to support the 44-year-old star as he hosted Saturday Night Live. The couple was passionately kissing in the street, holding hands and cuddling and being all cute together.

Also, read about The bisexual Bella Thorne makes it Instagram official that she has a new girlfriend! Is she still dating her boyfriend, Benjamin Mascolo?

The stranger things star David grabbed his new girlfriend for a smooch on her cheek as they walked side by side wandering around Downtown Manhattan. The 31-year-old singer then pulled him in closer for a big kiss on the lips.

Lily slew in a casual grey jumper with flared sleeves which she paired with baggy jeans and trainers and let’s not forget the Chanel bag. David, on the other hand, sported a blue bomber jacket, a matching t-shirt and grey trousers with a pair of brown trainers. The couple also stopped for lunch at cafe Gintane before visiting a jewelry store in Chinatown.

Also, reading about Singer Rihanna confirms that she is dating billionaire Hassan Jameel!

Lily Allen calls David Harbour ‘mine’ after confirming the relationship

Their romance can’t be cuter. After being spotted packing on the PDA during a stroll in NYC on Sunday morning, Lily Allen took to her Instagram to officially share with us the news that David Harbour is “mine”.

Capturing her beau during his stand-up set for Saturday night live, Lily posted a snap to Instagram, captioning it “Mine.” How cute! David Harbour’s parents were also there to support the star at the show, which saw him star in a joker-style skit about a film adaptation of Sesame’s Streets Oscar the Grouch.

Lily also took it to her Instagram that she’ll be leaving the UK after Brexit which made fans speculate that she’ll be staying with her new man. The rumors of the couple dating first surfaced back in August when the unlikely pals were spotted enjoying the Hughie Fury vs Alexander Povetkin boxing match at the O2 Arena.

Also, read about  ‘ The Bachelorette’ Tyler Cameron is single!! Andi Dorfman laughed off the rumors of dating Cameron.

A short bio on Lily Allen

Lily-Rose Beatrice Cooper is an English singer and songwriter. She is the daughter of actor Keith Allen and film producer Alison Owen. Her first mainstream single “Smile” reached number one on the UK singles chart in July 2006. Her debut record, alright still was well received and sold 2.6 million copies worldwide.

A short bio in David Harbour

David is an American actor. Likewise, he is well known for his role as Jim Hopper in the web television series Stranger Things (2016–present). More bio…