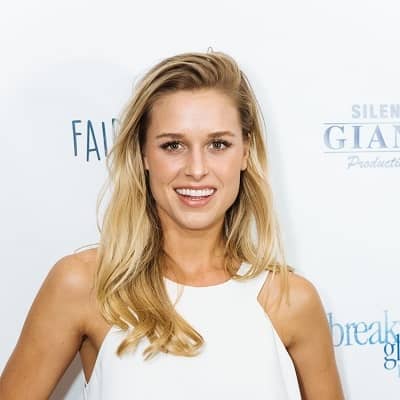 What is the relationship of Lily Anne Harrison?

Lily Anne Harrison is currently in a relationship with Peter Facinelli, an actor, who is 16 years senior to her. The pair got engaged on January 1, 2020.

Recently, the couple welcomed a child on September 5, 2022. They have not revealed the gender of their baby as of now.

Who is Lily Anne Harrison?

Lily Anne Harrison is a well-known American Actress, model, TV Personality, social media influencer, and entrepreneur. In the 2010 season of One Tree Hill, she made her television debut.

Lily was born on February 6, 1989, in Los Angeles, California. In terms of nationality, she holds an American identity. As of now, her age is 33 years old. She was born to parents Gregory Harrison and Randi Oakes.

Her brother, Quinn Edgar Harrison, was adopted. Also, she is the middle sister of Emma Lee Harrison and Kate Harrison. Anne has been very secretive about her academic qualifications.

Lily is a famous American actress, model, TV Personality, and social media influencer. The gorgeous actress is mostly known for her excellent acting skills. As per the IMDB, Lily made her television debut in 2010 with the Tv show One Tree Hill.

Later, she made an appearance in a number of movies and television shows.

Who is her Husband Peter Facinelli?

Peter Facinelli is an American Actor mostly known for his role in the Twilight saga as the loving father of the Cullen vampire family.

Also, he was in a regular on the Showtime comedy-drama series Nurse Jackie playing the role of Dr. Fitch “Coop” Cooper.

In 1995, Peter made his feature film debut in Rebecca Miller’s Angela, and the same year the Tv drama The Price of Love gained the attention of critics.

Likewise, in 2000 he starred alongside James Spader in the science fiction movie Supernova. He appeared in The Scorpion King in 2002 and Riding in Cars with Boys in 2001.

From 2002-2003, he portrayed Donovan “Van” ray on the Fox television series Fastlane. Furthermore, he is well known for playing Mike Dexter in the 1998 movie Can’t Hardly Wait.

Being an Actress, Lily has earned a wealthy sum of money from her profession.

As per the sources, she has an estimated net worth of $1 million, whereas his exact salary, income, and warnings are not determined yet.

Throughout her professional career, Anne has not been a part of any controversial news.

She avoids appearing in unwanted scandals and rumors and maintains distance from her professional and personal life.

Harrison stands at an average height of 5 feet and 7inches and weighs approx 60kgs.

She has a gorgeous looks with a pair of hazel eyes and a golden brown colored hair.

Lily is active on Instagram with 11.8k followers under the username @lilyanneharrison. She often shares a picture with her family on her Instagram handle.