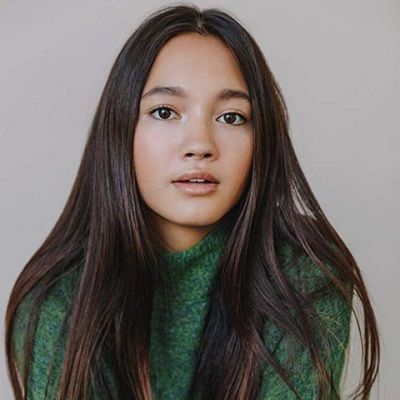 Lily Chee’s relationship status is single. There is no rumor regarding her love life.

The actress is very much focus when it can to her career.

She loves to travel and to play soccer. Till the date, she has been to places like Hawaii, Alaska, Mexico, Paris and many more. Especially, she loves beaches.

She has a soft spot on her heart when it comes to the dog. She also has a pet dog.

Who is Lily Chee?

Lily Chee is an American actress and model. Chee is renown as Young Elektra of the TV series, Daredevil.

Lily Chee was born on the 19th of September 2003 in Atlanta, Georgia. She is of Far East Asian ancestry. Her father is of Chinese origin.

She is second among her siblings Mabel and Nuala. Currently, she lives in Brooklyn, New York City along with her family.

– At the age of nine, she was discovered by the agent of Wilhelmina Models. At the time, she was shopping with her father in a grocery shop. she was associated with the modeling agent. After that, she became the face of brands like Target and Old Navy.

– Soon after gaining fame as a model, in 2016, she debuted on TV with the series, Daredevil. In the series, she characterized the role of Young Elektra. Despite, her role was a minor in the series, she had performed some difficult stunt. Due to such devotion toward work, she was highly appreciated by many including director and producer.

– After that, she debuted in movies with the movie, 2017- Sunset Park as Young Jessica Rho. One year later, she was featured in the short movie, Annie LeBlanc: Don’t Keep Me Guessing.

– Meanwhile, she was also walked at the Petite Parade Fashion Show as a model. She has also been a face for designs by famous designer Alivia Simone.

– She was cast in the TV series, Chicken Girls as Britney along with the actors like Annie LeBlanc, Indiana Massara, and Brooke Elizabeth Butler.

– Apart from TV series and modeling, she also uploads videos and vlogs regarding her travels, makeup, and daily routine on YouTube.

She is a brown-eyed brunette. Her height is 5 feet and 8 inches.

Apart from that, she is active in Tiktok with 615.67k followers and also has a self-titled YouTube channel with 187 subscribers.