Posted on September 12, 2021 | In Married , Relationship , Wedding
Share this 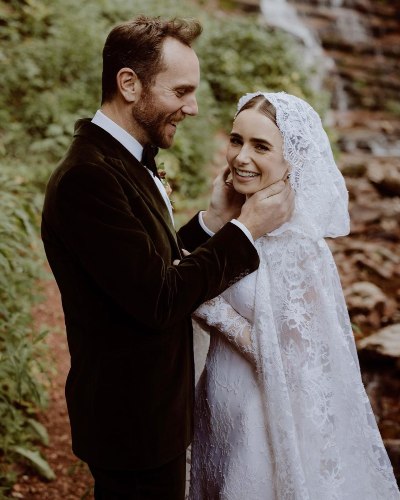 Lily Collins and Charlie McDowell are officially married couples. On 7th September 2021, they both shared their wedding photos on Instagram. Lily’s beautiful wedding dress took more than 200 hours to create. Their marriage ceremony was held at Dunton Hot Springs in Colorado. Also, the gorgeous bride wore a Ralph Lauren Collective gown made of Calais-Caudry lace.

As per Ralph Lauren Collin’s custom hooded dress and cape took over 200 hours of meticulous craftsmanship to construct and is composed of a Calais-Caudry turtleneck gown crafted on a Leavers weaving loom. It was also covered in Swarowski-beaded micro flowers and silk organza petals that enhanced and followed the Calais-Caudry lace’s intricate pattern. She wore a velvet tuxedo from the designer’s Purple Label collection.

“What started as a fairytale, is now my forever reality. I’ll never be able to properly describe how otherworldly this past weekend was, but magical is a pretty good place to start…”

On her other post of kissing her husband, Charlie said,

“I’ve never wanted to be someone’s someone more than I do yours, and now I get to be your wife. On September 4th, 2021 we officially became each other’s forever. Also, I love you beyond @charliemcdowell…⁣”

Charlie also shared similar posts on his Instagram and shared how much he love Lily.

Also read Lily Collins reveals that she is engaged to her boyfriend Charlie McDowell!

Lily Collins is a British-American actress and model who is immensely popular for her role of Collins Tuohy, and Snow White in the films The Blind Side and Mirror Mirror respectively. She is also famous for her work as an actress in the 2011 movie Abduction whereby, she co-starred with Taylor Lautner. Read more bio…

Jennifer Lawrence and Cooke Maroney are going to be parents – expecting first child together!
Tags : Actress Emily in Paris