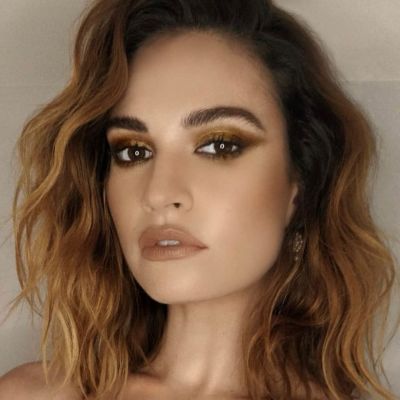 I really want to play interesting roles, but you want to work, so it's a balancing game.

Mum would have a panic attack if she had to stand up and give a speech around a table.

I don't like seeing celebs looking too skinny, I love it when they look healthy and comfortable in their bodies and embrace their curves.

Lily James is mingled. Presently, She is in a romantic relationship with musician Michael Shuman.

In February 2021, they were spotted kissing while leaving a hotel in London.

Lily has dated an actor Jack Fox from 2011 to 2012. She then encountered her co-star of the movie Pride and Prejudice and Zombies Matt Smith from June 2014 to late 2019.

In 2020, she had a fling with actor, director, and musician, Dominic West. The same year, It was rumored that she was romantically involved with American actor Chris Evans.

Who is Lily James?

Lily James is a renowned English film and stage actress, model. She rose to fame for her roles in ‘Downton Abbey’, ‘Cinderella’, Baby Driver’ and ‘Mamma Mia! Here We Go Again’.

She recently starred as Peggy Piggott in the drama film, The Dig, based on the 2007 John Preston’s novel of the same name.

Lily was born on April 5, 1989, as Lily Chloe Nonette Thomson. She hails from Esher, Surrey, England.

James is the daughter of a musician James Thomson (Father) and an actress Nonette Mantle (Mother). In 2008, her father passed away from cancer.

Further, she is of British nationality, and she belongs to mixed (French, English, Scottish, and German).

Talking about her education, she went to Tring Park School for the Performing Arts.

Then, she enrolled at London’s Guildhall School of Music and Drama from where she graduated in 2010.

In 2010, Lily made his first television appearance on the BBC One series, Just William based on the Richmal Crompton of the same name. In the series, she portrayed the role of Ethel Brown. The following year, she appeared in another tv series, Secret Diary of a Call Girl aired on ITV2 as Poppy.

That year, she also performed in the production of Vernon God Little as “Taylor” at Young Vic Theatre and Othello as “Desdemona” at Crucible Theatre. Similarly, she was regularly cast as Lady Rose Aldridge née MacClare on ITV another series Downton Abbey in 2012. In 2012, James made her debut on the big screen through the short film Chemistry as Ines. The same year, she featured in the films like Wrath of the Titans, Broken, and Fast Girls.

She went to audition for Anastasia, the stepsister of Cinderella but got the lead role in the 2015 romantic fantasy film, Cinderella. Furthermore, her other credited films are,

Lily’s upcoming project is, she is screening as “Zoe” is an upcoming romantic comedy film, What’s Love Got to Do With It?. The film casts Emma Thompson, Sajal Ali, Shazad Latif, Rob Brydon, Shabana Azmi, and Asmi Chaudhry.

Similarly, she is portraying the role of “Pamela Anderson” in the upcoming biographical miniseries, Pam & Tommy. The series is set to be released on February 2, 2022.

As of 2021, Lily has amassed an estimated net worth of around $8 million from his successful acting career.

Her salary and other earning are still under.

The actress stands at the height of 5 feet 7 inches tall and her weight is about 55 kg. Likewise, she has a dark brown pair of eyes and her hair color is light brown.