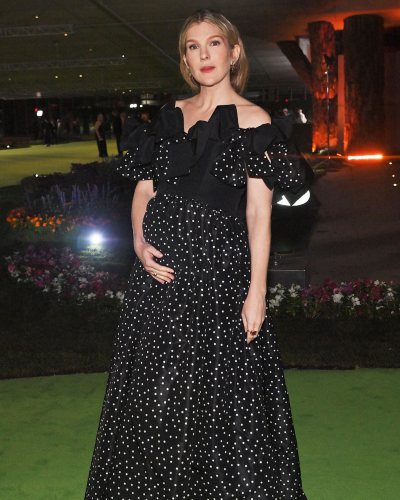 Lily Rabe is pregnant again! The American Horror Story actress confirmed that her third child is on the way. She is expecting her third baby with longtime partner actor Hamish Linklater.

On 25th September 2021, she attended the opening gala for the Academy Museum of Motion Pictures in Los Angeles while she cradled her baby bump. She wore a black Carolina Herrera dress and her baby bump was clearly visible.

Lily Rabe gave birth to her first child in 2017 after announcing her pregnancy back in December 2016 at the 2016 Kennedy Center Honors in Washington, D.C. She welcomed a daughter which she announced by posting a photo of her snuggling up close to the baby girl in honor of International Women’s Day in March 2017. She wrote,

Again in June 2020, the couple Lily and Hamish gave birth to a second child. They announced the pregnancy of a second baby back in August by posting a photo of Lily showing her baby bump.

Hamish is going to be a father of four children as he has a daughter named Lucinda Rose from his previous relationship.

How much is the net worth of Lily Rabe?

Lily Rabe has a net worth of $2 million as per Celebrity Net Worth. Rabe has earned from her film, TV series, and stage works. Her film works include  The Tender Bar, Fractured, Vice, Golden Exits, The Veil, Pawn Sacrifice, and more.

Her prominent TV series work is in American Horror Story, The Underground Railroad, Tell Me Your Secrets, The Undoing, Voltron: Legendary Defender, The Whispers, The Good Wife, and Medium.

Lily is an American movie, television, and stage actress. Lily was seen acting in the play – The Merchant of Venice and the anthology series American Horror Story.

She was also seen in The Whispers. Read more bio…