Lily Rabe is an American actress. She is known for her performance as Portia in The Merchant of Venice. 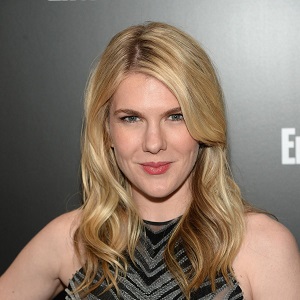 Before I ever start a job that I'm really excited about, I usually have some sleepless nights or weeks or months. But that anticipation for a person like me... I don't do so well with a lot of time off

For a long time, I was cautious of working with my parents because I wanted to feel separate from them in the community. Now there's no more wasting time

I will say that I've been lucky enough never to have to do a job I didn't want to do, or a play I wasn't in love with.

Lily Rabe has been dating the actor, Hamish Linklater since May 2014. They have a newly-born daughter together.

Her lovely daughter was born on March 9, 2017. Then in Aug 2020, this couple welcomed their second child.

Also, it was informed that Rabe and her boyfriend had been shopping for their engagement. There is no other relationship history about Rabe reported to this date.

Who is Lily Rabe?

Lily Rabe is an American movie, television, and stage actress. Lily Rabe was seen acting in the play – The Merchant of Venice and the anthology series American Horror Story.

She was also seen in The Whispers.

Rabe was born as the daughter of playwright writer David Rabe and Late actress Jill Clayburgh in New York City.

Her siblings include an older half-brother from her father’s side named Jason, a musician, and her own younger brother, Michael an actor, and playwright.

She was raised in Bedford and moved to Lakeville, Connecticut, where she went to Hotchkiss School. She studied dance for ten years. Lily used to teach ballet at a summer arts program in Connecticut when she was asked to perform monolog in the final production by the program’s acting instructor.

After performing in a monolog from the play Crimes of the Heart, she realized her dream and joined Northwestern University to study acting and got graduated in 2004.

Lily made her screen debut in the film Never Again, in which her mother played the lead role. In 2002, she again worked with her mother at the Gloucester Stage Company in Massachusetts and made her professional stage debut. After acting in the plays – Speaking Well and The Crazy Girl, she was able to get an Equity Card, membership cards for actors.

After her graduation, she moved back to New York and appeared in a series of one-act plays presented as The Democratic Project. Rabe was cast as “Portia” in her debut appearance in a production of The Merchant of Venice. For her other work in another production, “Broadhurst Theatre”, she was nominated for the Tony Award for “Best Actress in a Play”.

Rabe made her television screen debut in 2005 with her appearance in an episode of Law & Order: Criminal Intent. Since then she had small roles in many series until August 2011. She got her first regular role as Nora Montgomery in a horror series, American Horror Story.

She was again cast in its second season but with a different role. For her role in the second season as the nun Sister Mary Eunice Mckee, she was nominated for “Critics’ Choice Television Award. She appeared in all seasons of the series among which she had a main role in the last one as Shelby Miller.

There was a rumor of Rabe’s break-up with her three-year-old boyfriend Hamish Linklater. However, this rumor is just a rumor. There are no other pieces of information and reports concerned with Rabe.

Lily has 4k, 492, and 67k followers on Facebook, Twitter, and Instagram respectively. She manages an official site that allows people to view his upcoming tour dates, events, pictures, news, videos, and bio.

You may also like Christopher Jackson, Guy Garvey, and Tyler Joseph.