Lily-Rose Depp is a French-American actress and a model. She is extremely prominent for her role in the film titled “The Dancer” (2016) as ‘Isadora Duncan’. She is unmarried. 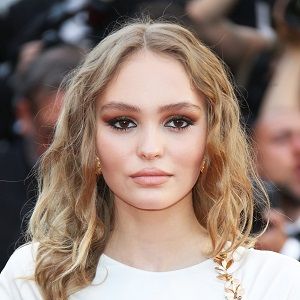 Art is such a personal experience, I really try to make my own thing

I wanted to be a singer, but once I started acting, I felt so comfortable. Now, all I want to do is act

The only movies I want to do are the ones I'm passionate about. I care about school, and I'm still a kid. I want to live like that while I can.

Cute and adorable Rose is an unmarried girl. She is in a relationship. She is dating a guy named Ash Stymest. He is an English model.

The couple is together for a very long time and is often seen with each other in public places. Recently, they went on a vacation at Disneyland Paris and uploaded many pictures on her social media handle.

Also, she went for house hunting with her boyfriend, Ash in July 2017.

Who is Lily Rose Depp?

Lily-Rose Depp is a French-American actress and a model. She is extremely prominent for her role in the film titled “The Dancer” (2016) as ‘Isadora Duncan’. She has made recognizable position in French acting field at the young age.

Rose was born to Johnny Depp and Vanessa Paradis on May 27, 1999, in Paris, France. Her nationality is French and belongs to Mixed (French, English, Irish, Scots-Irish/Northern Irish, Scottish, Welsh, and Dutch) ethnicity.

Her mother’s name is Vanessa Paradis and father’s name is Johnny Depp. She has a brother named John Christopher Depp III. As per her parents, Rose was highly interested in an acting field from the very early age and was dedicated too.

Lily is a high school graduate. On June 201, she was seen with bouquets of flowers on her graduation ceremony.

In the same year (2016), she appeared in a successful film titled “The Dancer” as ‘Isadora Duncan’ for which she received huge positive responses and reviews from fans and viewers. Also, she was nominated for ‘César Awards’ in the category of ‘Most Promising Actress’ and ‘Lumières Awards’ in the same category.

She has a net worth of $1 Million but her salary is not revealed yet.

Currently, there are no desperate rumors regarding Rose’s personal and professional life. It seems she is doing best job without harming others for which she hasn’t been a part of controversy yet.

Moving toward her body measurements, she has a good height of 5 Feet and 3 Inches with bodyweight 47 kg. She has blonde hair color and her eye color is light brown. She has a well-shaped body with 31-23-32inches. Her shoe size is 30A and her shoe size is 7.5(US).

Also know more about the early life, career, net worth, relationships, and controversies of other actresses and a model like Alyssa Sutherland, Emily Sandberg, Nazanin Mandi, and Arielle Vandenberg.