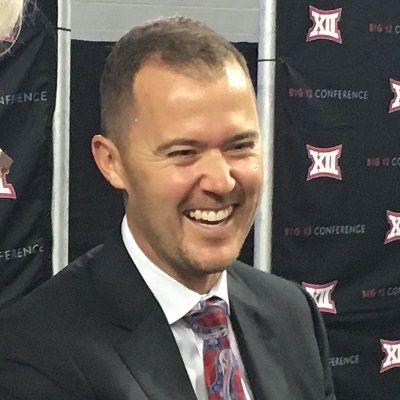 These things, when you leave a university, they either fire you or you leave on your own accord and neither one of them are easy and we understand it.

What is the relationship of Lincoln Riley?

Lincoln Riley married Caitlin Elyse Buckley on July 14, 2004. They were wed in the First Methodist Church in Marble Falls, Texas, and flew to Maui, Hawaii for their honeymoon.

Born on June 29, 1985, in Texas. Caitlin Elyse Buckley is the daughter of Darrell and Beth Buckley, Dimmit, Castro County, Texas, US. She graduated from Dimity High School in 2002 and from Texas Tech University in 2006.

Lincoln and Caitlin have two daughters Sloan and Stella and two pets Boomer and Sooner. Mr. and Mrs. Riley live with their family of six in Norman, Oklahoma, US.

Who is Lincoln Riley?

Lincoln Riley is an American football coach. Lincoln joins USC in Nov 2021 after leaving Oklahoma Sooners football as a head coach. He coached in Oklahoma for 7 years.

He is football’s most successful coach in five years in Norman.

Lincoln Riley was born on September 5, 1983, in Lubbock, Bailey County, Texas, US.

His parents are Mike Riley and Marilyn Riley. They live in Muleshoe near their cotton warehouse.

Lincoln ran the tracks while at Muleshoe High School, Muleshoe, West Texas. He became started playing defensive during his studies at high school.

In 2002, he joined the Texas Tech University football team as a quarterback and played as a walk-on. A year later, he was the assistant to Coach Mike Leach and then became a receivers coach.

Thereafter for five seasons, he was the offensive coordinator at East Carolina University under Ruffin McNeill on December 28, 2009.

On 2015, January 12, Riley was hired by Bob Stoops as the offensive coordinator. He led the Sooners to the 7th-ranked offense in the country and also at the College Football Playoff.

Riley succeeded Bob Stoops who retired as head coach after the 2016 season. He led the Oklahoma Sooners to the 2017 Rose Bowl, ranked as #2 in the College Football Playoffs.

In the 2017 season, Riley led Baker Mayfield and the team to the Big 12 conference championship, #2 in the CFP rankings, and received a berth in one of the CFP semifinal games for the Rose Bowl.

Oklahoma lost the 2018 Rose Bowl to Georgia in double overtime 54–48. The year after, Oklahoma Sooners along with Riley as its coach, made it back to the playoff. Sadly they lost to Alabama 45-34.

Announcements- You may want to learn about the nominees for the Broyles Award for 2019.

He coached Baker Mayfield, who later won the Heisman Trophy.

His alma mater is Texas Red Tech Raiders. Currently serving as the Head Coach for the Oklahoma Sooners, Riley’s net worth is $8m US. By the end of 2019, Riley will earn $6 million US.

Lincoln Riley is one of the highest salaried coaches in the top ten list.