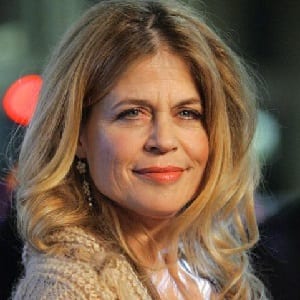 My heart is so light that it's amazing. I get to play all this grief, all this loss, all this disaster and chaos. It's hysterically funny. I am very light. I keep saying I'm Lucy Ricardo trapped in somebody else's body.

[At the 1997 Academy Awards, on then-husband James Cameron] My husband is the sexiest man in the world.

[on the development of the character Sarah Connor from the Terminator films] A woman who grows and transforms on screen is always a wonderful thing to play. Sarah went from a vulnerable, normal girl to someone who finds all of her deep reservoirs of strength and comes through it all.

[on James Cameron after their divorce] I love him as much as I ever did. But that doesn't mean that the heartache wasn't huge and I haven't suffered. I knew how Jim was when I married him and I love him still.

Linda Hamilton was previously married to actor Bruce Abbott. The pair was married from 19 December 1982 to 28 December 1989. They have a son together, Dalton Abbott. Her second marriage was with writer James Cameron. They were together from 26 July 1997 to 16 December 1999. Currently, she is believed to be single.

Who is Linda Hamilton?

Linda Hamilton is an American actress. People mostly know her for her portrayal of Sarah Connor in ‘The Terminator’ film series. Additionally, she also portrayed the role of Catherine Chandler in the television series ‘Beauty and the Beast.’

Hamilton was born in Salisbury, Maryland as Linda Carroll Hamilton on September 26, 1956. She was born to parents Carroll Stanford Hamilton and Barbara K. Holt. Additionally, she has an identical twin sister Leslie Hamilton Gearren and older sister and one younger brother. Her father worked as a physician who died when Linda was just five years old. She also has another brother, Tom. She is of American nationality. Furthermore, she belongs to a mixed ethnic background of English, Scottish, and Welsh.

Hamilton had her first major role as Lisa Rogers in the prime-time soap opera ‘Secrets of Midland Heights.’ Additionally, in 1982, she had a part in the thriller TAG: The Assassination Game.’ Previously, she also had roles in ‘Night-Flowers’, ‘Shirley’, ‘Reunion’, and ‘Rape and Marriage: The Rideout Case’. In addition, she appeared as Josie Greenwood in the TV movie ‘Country Gold’ in 1982. Since then, she has appeared in numerous other movies and television series. All in all, she has over 70 credits as an actress.

Some other movies and television series that Hamilton has appeared in are ‘Curvature’, ‘A Sunday Horse’, ‘Lost Girl’, ‘Defiance’, ‘Bermuda Tentacles’, ‘Bad Behavior’, ‘Air Force One Is Down’, ‘Chuck’, ‘Refuge’, ‘Weeds’, ‘Hard Times’, ‘The Line’, ‘In Your Dreams’, ‘Home by Christmas’, ‘Thief’, ‘The Kid & I’, ‘Smile’, ‘Missing in America’, ‘The Wonderful World of Disney’, ‘Buzz Lightyear of Star Command’, ‘Batman Beyond’, ‘The Color of Courage’, ‘On the Line’, ‘Shadow Conspiracy’ and ‘Separate Lives’ among others.

Hamilton has garnered three Golden Globe Award nominations. In addition, she has also received the Primetime Emmy nominations. In  1992, she won the Saturn Award for her performance in ‘Terminator 2: Judgment Day.’ All in all, she has 14 wins and 10 nominations for various awards to date.

Hamilton has not revealed her current salary. However, she has an estimated net worth of around $ 70 million at present.

Hamilton made the news recently after it was revealed that she would return for the next Terminator film. To date, she has not been part of any notable controversies.