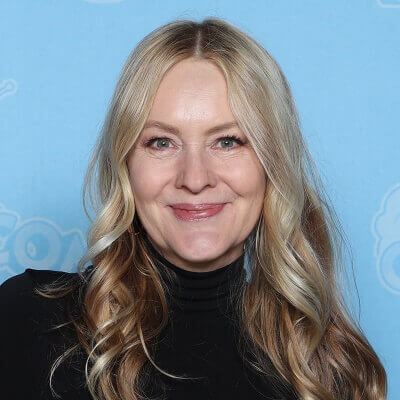 Linda Larkin is a married woman. She is married to Yul Vazquez. Her husband is an actor best known for his works in ‘The Outsider’, ‘Russian Doll’, and ‘Captain Phillips’.

The couple dated for a while before getting married in 2002. They exchanged wedding vows on 18 May 2002 in the presence of some close friends and family. They don’t have any children from their marriage so far.

Who is Linda Larkin?

Linda Larkin is an American actress, voice actress, and producer well-known for her works in Aladdin, Ralph Breaks the Internet, and Runaway Bride. She is best known for giving voice to the lead female character, Jasmine of Disney’s 1992 classic, ‘Aladdin’.

Linda Larkin was born in Los Angeles, California, USA, on March 20, 1970. As of 2020, her age is 50. Not much is revealed about her early life and family background. There is no information about her parents. Similarly, she has not revealed anything about her siblings, either.

There is no information about her educational background. She has not revealed anything about which school or college she went to.

Linda Larkin made her debut in 1990 in the science fiction comedy film, ‘Zapped Again!’ as Joanne. A couple of years later, she landed her best-known role. She voiced Princess Jasmine in Disney’s 1992 animated feature classic, ‘Aladdin’.

She reprised the role of Jasmine’s voice in Aladdin’s sequels and also in other movies, TV series, and even video games. Larkin reprised the role in its sequels, ‘The Return of Jafar’ (1994), and ‘Aladdin and the King of Thieves’ (1996).

Moreover, she also performed in the four parts of ‘Aladdin’s Arabian Adventures’. She once again voiced Jasmine in ‘Disney Princess Party: Volume Two’, and in the 2018 animated 3D comedy, ‘Ralph Breaks the Internet’.

For performing the voice of Jasmine, she had to lower her voice as Disney thought it was too high for the role. On August 19, 2011, she was honored by Disney as a Disney Legend.

Although she is still best known as the voice of Princess Jasmine, she also has done works in various other movies. One of her best-known roles is Gill’s girlfriend in the American romantic comedy starring Julia Roberts and Richard Gere, ‘Runaway Bride’ (1999).

Some of her other acting credits include ‘Personals’, ‘Two Ninas’, ‘Final Rinse’, Fear of Fiction’, ‘Custody’, ‘The Maw’, ‘Amok’, etc.

How much is Linda Larkin worth?

Linda Larkin has an estimated net worth of around $100k – $1 million. She has not revealed her annual salary. However, on average, an American actor earns around $45k annually.

Larkin stands at a height of around 5 feet 4 inches. She weighs around 53 kg. Moreover, she has body measurements of 32-24-35 inches for breasts, waist, and hips. Her eye color is green and she has blonde hair.

Linda has not been involved in any controversies. She has been able to keep herself away from any type of controversy and scandal. So far, she has not done anything controversial in her career. Similarly, there are no rumors about her.

You may also like to read the Bio, Career, Net Worth, Relationships, Body Measurements, etc of Julia Roberts, Anna Shaffer, Jem Wolfie, etc.