Linda Park is a popular Korean-American actress. Linda Park has been married to actor Daniel Bess and is the mother of one son. 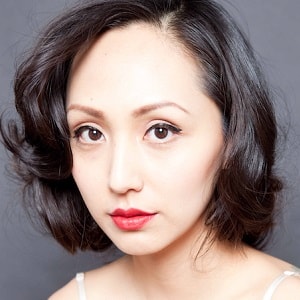 Linda Park has been married to actor Daniel Bess since October 11, 2014. The couple welcomed a son on June 17, 2018. The family are living together and spending their quality time with each other.

Also, there is no sign of divorce between the couple.

Who is Linda Park?

Linda Park is a popular Korean-American actress. She is recognized in the role of communications officer character Hoshi Sato in the series ‘Star Trek: Enterprise’.

Her fans often relate her with Grace Park, a Canadian actress but she has no connection with her at all.

Linda was born on July 9, 1978, in Seoul, South Korea. She is currently 40 years old. Linda was raised in San Jose, California.

She is fluent in English, Korean, and speaks some French. She is very fond of dancing and has continued to study and practice ballet. Linda is the Bronze-level international ballroom dancer.

She holds dual nationality: Korean and American and her ethnicity is Korean.

She made her appearance in several theatrical productions in her teenage at Bellarmine College and Notre Dame High School.

Later, she joined Boston University and received a Bachelor of Fine Arts in 2000. She also spent a semester in England and during that time, she studied at the London Academy of Musci and Dramatic Art and at the Royal Academy of Dramatic Art.

She debuted her professional career playing the character Anna Lin in the series ‘Popular’ in 2001. Later, she had a small role in the feature film ‘Jurassic Park III’ in 2001, in which she portrayed the character of Ellie Satler’s assistant. Then, she was cast in the role of Hoshi Sato in the fifth incarnation of the ‘Star Trek’ franchise, ‘Star Trek: Enterprise’. The franchise was premiered in September 2001.

She is the producer of the short film ‘My Prince, My Angel’ and she starred in her own film in 2003 portraying the role of Shen. She played the role of Clytemnestra in New York City production of ‘Agamemnon’ from October 19 to November 11, 2005.

Then, Linda portrayed the character Anne Deever in ‘All My Sons’ at the Matrix Theater in Los Angeles in 2011. She also appeared as a series regular in the second season of ‘Crash’ in 2009 in which she played the character of Maggie Cheon for the thirteen episodes of the season. Unfortunately, the show ended after the demise of Dennis Hooper.

Also, she co-founded the company named Underground Asylum. Talking about awards and nominations, she has not been able to achieve any of those in her career till date.

She has maintained her personality so far and has not been involved in any types of rumors and controversies in her career.

To know more about Adrianne Palicki, Brina Palencia, and Christine Lakin, please click on the link.