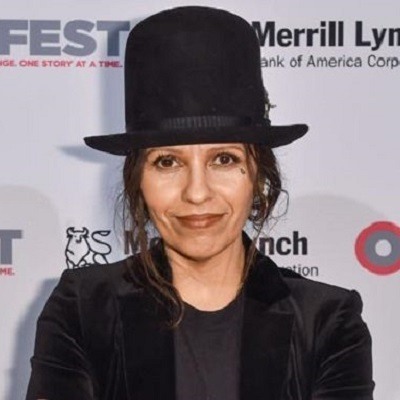 "I'm not afraid of Courtney Love. Christina doesn't scare me. None of these women scare me. If you push me, I'll push back. Your little diva attitude and your spoiled ways and your being late - that's not going to happen in my studio. Check your ego at the door".

I think she's making really bad records, and that girl is so freaking talented. That 'Stupid Girls' video is exactly that: stupid. How much more are you going to make fun of everyone else before you start pointing the finger at yourself? I want her to call me so bad and say, Linda, I want to make a record with you again,' and I'd say, 'Bring. It. Fucking. On'."

Linda was married to actress Sara Gilbert. Her sexual orientation is Lesbian.

They engaged in April 2013, and they married on March 30, 2014, in a rock concert themed ceremony. Together, they have a son, Rhodes Emilio Gilbert Perry.

Emilio was born on February 28, 2015. Gilbert already has one son and a daughter from her previous relationship.

Previously, Perry was in a relationship with actress Clementine Ford. Perry’s former wife Ford told the magazine, Soap Opera Digest, about their married in May 2009. Later, they separated in 2011.

Who is Linda Perry?

She is a former lead vocalist of the American rock band 4 Non-Blondes.

Linda Perry was born in Springfield, Massachusetts, U.S, on April 15, 1965, to Alfred Xavier Perry and Marluce Perry. Her birth sign is Aquarius.

Her father was Portuguese-American and her mother is Brazilian. Similarly, she developed musical talent and interest from a young age.

Linda struggled with kidney disease and dealt with drug addiction. Even after all this, she focused on music.

Linda Perry wrote her first song at the age of 15. She started her music career while in San Franciso, by playing on the street and coffee houses and bars. Later 4 Non-Blondes band, asked her to join their crew. In 1989, together they launched their first album called What’s Up?.

Perry signed a contract with pop-rock singer Pink in 2000. Then, she works as a Producer and songwriting assistance on Pink’s second album, Missundaztood. This album was successful all over the U.S. While working with Pink, Perry also got huge credit for the songs Get the Party Started and Lonely Girl.

Contribution in Films and TV Shows

In 2014, Perry appeared in the VH1 TV show, Make or Break. she worked as a composer and songwriter for the musician like VanJess and Winner Hemming.

In 2015, she wrote a song, Hands of Love, for the American drama movie Freeheld. This song was performed by Miley Cyrus.

Collaborating with Dolly Parton in 2018, she co-wrote a song Girl in The Movies for the Netflix film Dumplin. This song was nominated for Golden Globe Awards as well as Grammy Awards.

Perry’s net worth is approximately $18 million US.

A music composer earns an average salary of $85 k in the US.

Linda Perry has dark brown hair and brown eyes. Her height is 5 feet 3 inch and weight is 55 kg.